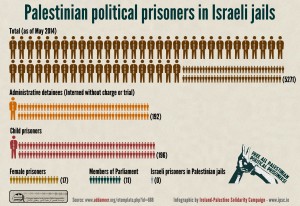 According to Addameer, the Palestinian prisoner support and human rights association, as of 1st May 2014 there were 5271 Palestinian political prisoners in Israeli jails. Of these, 192 were held under Administrative Detention (indefinitely renewable internment without charge or trial), 196 were minors, and 17 were female. Here’s our infographic of how that information looks For more information, please see the Addameer factsheet here.