Palestine Podcast #47: ‘Collective Punishment as a Tool of Israeli Domination’ 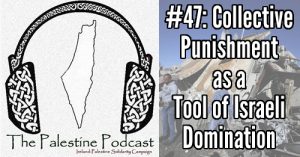 The Palestine Podcast showcases a selection of lectures, talks and interviews featuring leading experts and social justice activists active on the Palestine-Israel issue. Brought to you by the Ireland-Palestine Solidarity Campaign. Click here to view all podcasts. ===== PP#47 – ‘Collective Punishment as a Tool of Israeli Domination’ with Michael Lynk, Rania Muhareb, Munir Nuseibah, Budour Hassan, Sahar Francis & Nada Awad [2020-07-14] – (Download here) INFO: This episode features a fascinating and timely discussion of Apartheid Israel’s use of illegal collective punishment as a tool to dominate and control the Palestinian people, while utilizing so-called “security” pretexts and rhetoric … Continue reading →

The Ireland-Palestine Solidarity Campaign (IPSC) welcomed today’s announcement by the Irish Government regarding the provision of €6 million in extra funding to the UN Relief and Works Agency (UNRWA), which is tasked with overseeing the welfare of Palestinian refugees. However, the human rights organisation also called on the government to do more to help end Israel’s illegal blockade of Gaza which is putting Palestinians at risk during the COVID-19 pandemic and to put pressure on Israel to ensure it meets its legal obligations to provide adequate healthcare to the people of Palestine. IPSC Chairperson Fatin Al Tamimi said: “Palestinian refugees … Continue reading →

The Ireland-Palestine Solidarity (IPSC) campaign stands with the millions of Palestinians all over the world who have condemned and rejected the Trump Administration’s so-called ‘Deal of the Century’, which yesterday was unveiled in full. IPSC Chairperson Fatin Al Tamimi, herself a Palestinian, said: “This is not a deal, this is a re-partitioning of Palestine accompanied by a list of unacceptable demands placed upon the Palestinian people insisting upon our total surrender; namely the renunciation of our human, national, democratic, territorial and economic rights – not least the right of return for millions of refugees, the right to self-determination in our … Continue reading →

THANK YOU! You did it – we raised €10,000 and will be taking the EU to court over Israel’s illegal settlements

You. Have. Been. Amazing! Within 3 weeks we – the IPSC and our European Coalition partners in the ECCP – managed to collect over €10000 for legal proceedings at the European Court of Justice, where we’ll challenge European complicity with Israel’s illegal settlements. Thank you all so much for your generous support – and please keep an eye on our website and social media for further campaign and legal updates!