Press Release from the Irish Ship To Gaza campaign Responding to an urgent call for international solidarity from 46 civil society organisations in Gaza, an Irish ship MV Saoirse and a Canadian ship Tahrir have successfully reached international waters in the Mediterranean Sea on a mission dubbed Freedom Waves to Gaza. The boats, two civilian vessels carrying 27 passengers from seven countries, are currently en route to Gaza, Palestine. They will sail from international waters directly to Gaza, and will not pass through Israeli territorial waters. This is the 11th attempt to break the siege of Gaza via the sea, … Continue reading → 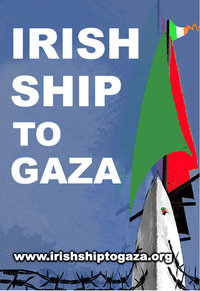 The Ireland Palestine Solidarity Campaign today announced that it had donated €1000 to the Irish Ship To Gaza Campaign. The money will help cover the costs of repairs to the MV Saoirse after the Israeli sabotage of the boat in June this year, and fuel for the when it sets sail to Gaza soon. IPSC Chairperson Martin O’Quigley said: “Although largely untalked about in the media, the illegal siege of Gaza remains in place, and the IPSC supports such civil society efforts to break this inhumane blockade once and for all. We hope this small contribution will help achieve this … Continue reading →