Irish Ship to Gaza National Coordinator Fintan Lane was able to make a phone call this afternoon from the Israeli prison in which he and 13 other Irish citizens are being held. He communicated the following to the Irish Ship to Gaza team in Dublin:   The takeover of the MV Saoirse was violent and dangerous. Despite very clear protests from the occupants of the two boats that they did not want to be taken to Israel, they were forcibly removed from the boats in a violent manner. The whole takeover took about three hours. It began with Israeli forces … Continue reading → 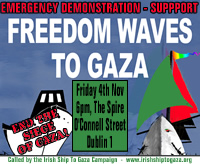