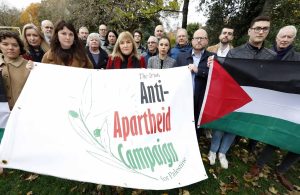 Events marking International Day of Solidarity with the Palestinian People 2022 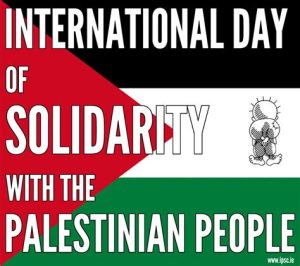 29th November will mark UN International Day of Solidarity with the Palestinian People – and there are a number of events organised on and around the day to celebrate ongoing Palestinian resistance to Israeli apartheid, occupation and settler-colonialism. On 30th November, Dublin will see a gala event, that will also mark the IPSC’s 21st anniversary, with special guest Saied Silbak. Saied is an internationally renowned Palestinian oud player and composer who will take us on a musical journey through Palestine’s rich music of joy and resistance. There will also be food, poetry, words and an exhibition of Palestinian art and … Continue reading →

It’s Nakba Week, when Palestinians and their supporters around the world commemorate Al Nakba (The Catastrophe) – the 1947-49 ethnic cleansing and dispossession of over 750,000 indigenous Palestinians by Zionist paramilitaries to facilitate the creation of the Apartheid State of Israel. As we cannot bring our message of remembrance, hope and solidarity to the streets this year, we are organising several online activities that supporters can get involved with this week. 1. Livestream Public Meeting with Diana Buttu Firstly, this WEDNESDAY 13th MAY at 6.30pm we are honoured to host an online public meeting with Palestinian legal expert and political … Continue reading →

With US President Donald Trump set to visit Ireland and be feted by our government next week, there will be protests around the country against this warmonger and viciously anti-Palestinian racist. The Ireland-Palestine Solidarity Campaign (IPSC) encourages all our members and supporters to attend these protests to let Trump and our government know that bigoted, misogynistic warmongers are not welcome on our shores.  In particular we ask supporters based in or near Dublin to join the Palestine bloc on the Dublin protest on Thursday 6th June, and those based near Shannon to join the ongoing protest there. The Trump-Netanyahu Axis … Continue reading →

Tomorrow, Wednesday 15th May is Nakba Day. It will mark the 71st anniversary of the Palestinian Nakba (‘Catastrophe’) which saw the expulsion of over 750,000 people, two-thirds of the indigenous Palestinians, forcibly uprooted from their homeland in an act of ethnic cleansing that facilitated the foundation of the Apartheid State of Israel. We ask you to join our commemoration protest atcions which aim to highlight the issue of Palestinian refugees and their ongoing struggle for their UN-mandated Right of Return to their the homeland they have been illegally expelled and exiled from by the Apartheid State of Israel. Today, Palestinian … Continue reading →