Watch: ‘Songs of Freedom: A Chorus for Boycott, Divestment and Sactions!’ event in Dublin

On Saturday 30th August 2014 The Ireland-Palestine Solidarity Campaign teamed up with the Resistance Choir to bring songs for Palestinian freedom to Dublin’s Henry Street, one of the city’s main shopping thoroughfare. Standing outside Arnotts iconic store, choristers sangs songs while leafleteers enaged, and distributed hundreds of Boycott Israeli Goods information sheets, to shoppers on the busy street. You can see videos of some of the songs below. IPSC Vice Chairperson Fatin Al Tamimi, who was present at the event, said “while the ceasefire between Palestinian groups and Israel is a welcome step towards Palestinian freedom, Israel’s occupation and associated … Continue reading →

A note on barcodes: Israel has not “changed its barcode to defeat BDS” 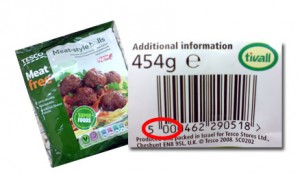 Stories and images have been doing the rounds on social media sites claiming that Israel has changed its barcode from 729 to 871 (or other numbers like 500) in order to fool people looking out for the 729 barcode. This mistaken belief stems from a misunderstanding of how barcodes work. A barcode only tells you which country a company is from, not where the contents of the product originate. What appears to be happening is that 871 is the Dutch barcode (and 500 is the UK one) and Israeli products are being sold by Dutch and UK (and even Irish)-based … Continue reading →

Boycotting Israeli products is one important way individuals can express their support for Palestine and opposition to Israeli apartheid against the Palestinians. What is even stronger is when people act collectively, and we all demand the removal of Israeli products – revenues from which help fund the decades long brutal occupation of Palestine – from the shelves of stores in Ireland. As we approach the 40th anniversary of the anti-apartheid strike at Dunnes Stores, an action that resounded all the way to Nelson Mandela’s cell on Robben Island in Apartheid South Africa; we believe that almost forty years on, it … Continue reading → 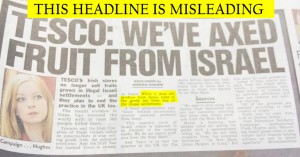 An article appeared in The Irish Sun yesterday which was headlined “Tesco: We’ve axed fruit from Israel”. This headline is very misleading. This statement from Tesco is simply a reaffirmation of Tesco’s previously held position that they won’t use settlement products in their Tesco brand range. While this is to be welcomed by Palestinian rights campaigners, it unfortunately does not say anything about not stocking settlement goods from other brands, nor about refusing to deal with complicit companies that have operations in the illegal settlements (eg Mehadrin). Furthermore, even in the article itself, it states “it does still sell products … Continue reading →

The Ireland Palestine Solidarity Campaign has written to the head offices of Dunnes Store, Marks & Spencer, Tesco Ireland, Aldi and Lidl asking to to remove Israeli products from their shelves, as they come from a country which continues a brutal military occupation of the occupied Palestinian territories. Revenues from these products help fund regular human rights abuses and violations of international law. The campaign cited two United Nations Special Rapporteurs; John Dugard and Richard Falk,  Israeli Human Rights groups B’Tselem and the Irish Congress of Trade Unions as likening Israel’s occupation of Palestine to the Apartheid regime that existed … Continue reading →