As the United Nations holds its annual General Assembly (UNGA) in New York, join the global Twitterstorm between 2pm and 4pm TODAY calling on the UN to take concrete action to end state and corporate complicity in Israeli apartheid. This Twitterstorm is part of a week of action calling on the UN to investigate Israeli apartheid and to work to end it. Use the hashtags #UNGA75 #UNInvestigateApartheid #SanctionsOnApartheid The UN played an important role in bringing apartheid in Southern Africa to an end – investigating South Africa’s apartheid regime and imposing sanctions on it, but the UN has not yet … Continue reading → 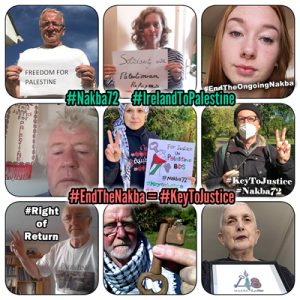 15th May 2020 was the 72nd Nakba Day, when Palestinians and their supporters commemorate the 1947-49 ethnic cleansing of Palestine. As we were unable to take to the streets with our ‘Moving Nakba Gallery’ like we do every year, this year we did something a bit different. Instead of showing the Irish public the realities of the ongoing Nakba, we wanted to show Palestinians – especially refugees – that we, the members and supporters of the IPSC, continue to stand in solidarity with their struggle for freedom, justice, equality and return – even if we can’t take to the streets … Continue reading →