The Palestine Podcast showcases a selection of lectures, talks and interviews featuring leading experts and social justice activists active on the Palestine-Israel issue. Brought to you by the Ireland-Palestine Solidarity Campaign. Click here to view all podcasts. ===== PP#54 – Palestinian Museums, Museums for Palestine’ with Faisal Saleh and Salim Abuthaher [2020-11-10] – (Download here) INFO: In this episode of the Palestine Podcast we invite you to listen to a fascinating discussion on how Palestinian museums, in both Palestine and the diaspora, operate politically and culturally to open up new imaginations and social futures for Palestine and the Palestinians. The … Continue reading → 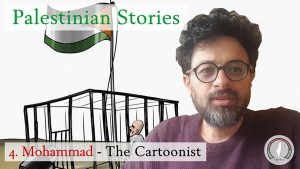 In the third of our Palestinian Stories short video series, we hear from Aziz, a young Palestinian from Gaza who now lives in Ireland. Aziz speaks of how he was excited to come to Ireland and how he has adapted to his new life here – and talks of the enjoyment he feels when sharing Palestinian culture through music and dance with Irish people. Palestinian Stories is a new series of short videos featuring the voices and stories of Palestinians living in places from Bethlehem to Beirut to Blanchardstown. SUBSCRIBE TO OUR YOUTUBE CHANNEL FOR MORE VIDEOS LIKE THIS.

On Saturday 29th June 2019 the Ireland-Palestine Solidarity Campaign (IPSC) participated in the first ‘Pride Alternative’ event in Dublin. The event was established in protest at the increasing corporatisation of the Dublin Pride parade, and the associated pinkwashing of deeply problematic companies and institutions. IPSC Chairperson Fatin Al Tamimi delivered a speech at the rally about the reasons the IPSC was supporting the event, and about Israel’s cynical use of pinkwashing to mask it’s oppression of the Palestinian people. Below is a video and the text of that speech. In solidarity with our friends in Queer Action Ireland, who have … Continue reading →