The Irish Campaign to Boycott the Eurovision in 2019 in Israel welcomes the motion passed by the Dublin Broadcasting Branch of the NUJ on 29th January whereby it states it “will support any member, working in RTÉ or elsewhere, who chooses to exercise a conscientious objection towards involvement in coverage of the song contest.” The motion was passed by a large majority and represents a recognition that the Eurovision contest in Israel presents serious ethical issues for anyone who cares about human rights. We welcome this support for workers choosing not to participate in coverage of the contest, either in … Continue reading →

Sign the Irish Call to Boycott Eurovision 2019 in Israel

Ireland must play no part in the art-washing of Israeli oppression. Palestinian artists, journalists and civil society groups have issued a call for internationals to boycott the 2019 Eurovision due to be staged in Israel, due to Israel’s “regime of military occupation, settler-colonialism and apartheid” which is “shamelessly using Eurovision as part of its official ‘Brand Israel’ strategy”. In solidarity with this call from the oppressed Palestinian people we ask you to join some 17,000 people in signing the Irish petition calling for RTÉ, and all potential participants, to boycott Eurovision 2019 in Israel. CLICK HERE TO SIGN THE PETITION … Continue reading → 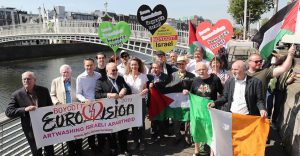 Celebrities and public figures gathered at Dublin’s iconic Ha’penny Bridge today, Wednesday 27th June, to launch the Irish Call to Boycott Eurovision 2019 in Israel.  CLICK HERE TO ADD YOUR NAME TO THE LIST OF SUPPORTERS The launch came just as news broke that the Israeli government announced that it had dropped its condition that the Eurovision must take place in Jerusalem, a first victory for the campaign seeking its total removal from the state. As the BDS Movement in Palestine has noted, this move “marks a striking failure in Israel’s PR efforts to assert its illegal claim over Jerusalem in … Continue reading →

Celebrities and public figures have been continuing to endorse the Irish Call to Boycott Eurovision 2019 in Israel, which has now been signed by over 3,500 people. You can sign up and share the call too by clicking here. In addition to the supporters already announced, the past 24 hours has seen Irish Nobel Peace Prize Winner Mairead Corrigan-Maguire and co-founder and former Chairperson of the Irish Anti-Apartheid Movement Gearoid ‘Garry’ Kilgallen pledge their support for the campaign. Also endorsing the call are the Musicians’ Union of Ireland, the trade union for musicians, singers and music professionals, and Irish Equity, the … Continue reading →

In August 2010 the Ireland Palestine Solidarity Campaign (IPSC) launched the following pledge, initially signed by over 140 (now 1,457) Irish creative and performing artists, whereby they undertake to boycott the Israeli state under present circumstances:   “In response to the call from Palestinian civil society for a cultural boycott of Israel, we pledge not to avail of any invitation to perform or exhibit in Israel, nor to accept any funding from any institution linked to the government of Israel, until such time as Israel complies with international law and universal principles of human rights.” – See the full list … Continue reading →