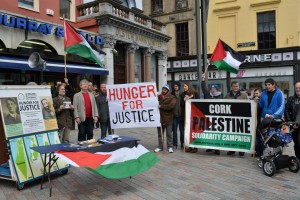 Invoking the memory of former mayor of Cork, Terence MacSwiney, the Cork branch of the Ireland-Palestine Solidarity Campaign has symbolically joined Palestinian prisoner Samer Issawi in his hunger strike for justice. Having collectively fasted for 24 hours on Saturday 20th April at a gathering in St. Patrick’s Street, members of Cork IPSC have started on a ‘hunger strike relay’, where each person will fast for 24 hours before handing the hunger baton to another member or supporter. (If you would like to get involved in the relay, please contact cork@ipsc.ie) A statement from Cork IPSC said: “The people of Cork … Continue reading →