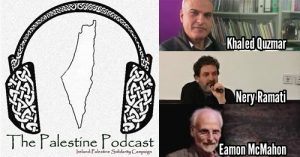 The Palestine Podcast showcases a selection of lectures, talks and interviews featuring leading experts and social justice activists active on the Palestine-Israel issue. Brought to you by the Ireland-Palestine Solidarity Campaign. Click here to view all podcasts. ===== PP#44 – Khaled Quzmar, Nery Ramati & Eamon McMahon at the ‘Palestinian Children’s Conference’ [2019-11-23] – (Download here) INFO: In November 2019, Trade Union Friends of Palestine and a number of Irish trade unions hosted a two day conference in Dublin on the situation of Palestinian children under Israel’s Apartheid regime. In this week’s episode of the Palestine Podcast, we hear from three … Continue reading →