The Histadrut: Its History and Role in Occupation, Colonisation and Apartheid 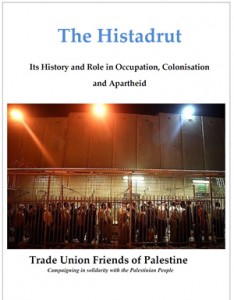 Richard Irvine has written the following important pamphlet for the ICTU Trade Union Friends of Palestine. From the introduction: “The Histadrut was founded in December 1920 in British Mandate Palestine. From its inception its aims were neither to build workers’ solidarity nor represent or campaign for workers’ rights; instead it was founded as an exclusively Jewish organisation to facilitate the colonisation of Palestine. As such it worked in tandem with the Jewish Agency to promote the exclusion of Palestinian labour and produce and was at the forefront of the movement to turn Palestine from an Arab country into a Zionist … Continue reading →