PUMA’s new marketing campaign, Only See Great, claims to spark a spirit of “optimism” and “hope.” Yet PUMA remains the main sponsor of the Israel Football Association, which includes teams in Apartheid Israel’s illegal settlements in occupied Palestine. As protests take place across the world ahead of the PUMA shareholders meeting on May 5, take action now to tell PUMA: We don’t need “inspiring” marketing ploys. We need PUMA to stop supporting Israeli apartheid. Click to Tweet at PUMA: Palestinians #OnlySeeApartheid Retired Irish rugby player Duncan Casey says: “Sport is about fair play and inclusion. Those that say sport and … Continue reading →

Pledge to Boycott AXA: the insurance company of Israeli apartheid

AXA profits from Israel’s oppression of Palestinians. The French insurance company, the second biggest insurance company in the world, is active in 57 countries and has over 108 million clients. Sign The Pledge to Boycott Axa Here! Even though AXA has human rights and environment policies it invests $7 million in three Israeli banks named in the UN database of companies involved in business with Israel’s illegal settlement enterprise: Bank Leumi, Israeli Discount Bank and Mizrahi Tefahot Bank. These banks operate branches in illegal settlements in the occupied Palestinian and Syrian territory (Golan Heights), providing mortgage loans for settlers and financial … Continue reading → 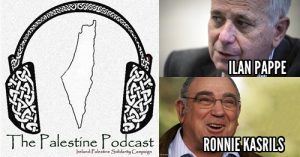 The Palestine Podcast showcases a selection of lectures, talks and interviews featuring leading experts and social justice activists active on the Palestine-Israel issue. Brought to you by the Ireland-Palestine Solidarity Campaign. Click here to view all podcasts. ===== PP#40 – Ilan Pappe & Ronnie Kasrils  on ‘Israeli Apartheid: Lessons from Jewish and South African Struggles’ [2020-06-11] – (Download here) INFO: This seminar was hosted and organized by our Dutch friends in Diensten en Onderzoek Centrum Palestina (DocP), BDS Netherlands, The Rights Forum and Palestine Link. When it comes to resisting and overcoming Israel’s apartheid regime in Palestine, what lessons can … Continue reading →