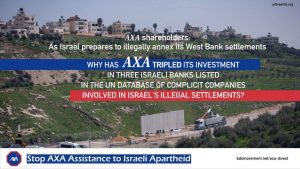 French insurance company AXA will hold its annual shareholders’ meeting on June 30. We need to make sure that divestment from Israeli apartheid is at the top of their agenda. Despite claims of social responsibility, AXA has almost tripled its investment in three Israeli banks that fund Israel’s illegal settlements. AXA also owns 9.03% of Equitable Holdings, which invests in five complicit Israeli banks and in Israel’s largest private arms company, Elbit Systems, which touts its weapons and surveillance technologies as “field-tested” on Palestinians. Just recently, the five Israeli banks were named in the United Nations’ list of complicit companies … Continue reading →