World renowned award-winning dissident Israeli journalist Gideon Levy spoke in Dublin’s Trinity College on Wednesday March 9th as part of Israeli Apartheid Week 2011 in an event organised by the Ireland Palestine Solidarity Campaign. Levy, an acclaimed critic of Israel’s brutal policies towards the Palestinian people via his column in the Israeli daily newspaper Haaretz, was launching his book The Punishment of Gaza. (Recorded by Kevin Squires – CitizenPartridge Blog Edited by Greg Manahan – iDirect Productions) Levy – who has written for Haaretz since 1982 – for has been the subject of much criticism in mainstream Israeli society for … Continue reading → 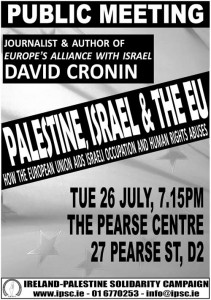