Over 10,000 citizens tell the EU to stop using Israeli drones against migrants! 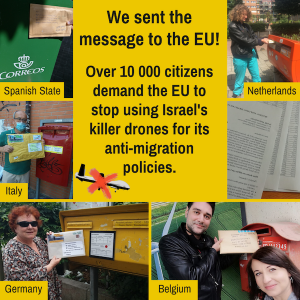 Over 10 000 citizens from all over Europe and beyond have signed a petition to demand an end to a drones deal between the European Maritime Safety Agency (EMSA) and Israel’s largest military company Elbit Systems. EMSA leases, through the Portuguese company CeiiA, two Hermes 900 ‘killer drones’. The €59 million deal started in November 2018 and is up for renewal within the coming months.  The signatories also demand that EU member states refuse the usage of these drones in their airspace.  See the full text of the petition here: https://petition.stopthewall.org/ The ‘handover’ via mail post of the citizens’ petition … Continue reading →

The Ireland-Palestine Solidarity Campaign (IPSC) has welcomed the support from over 140 general election candidates for a series of election pledges supporting justice for the Palestinian people. At least 147 candidates, from most parties and many independents, have signed the three pledges, which were also endorsed collectively by Sinn Féin, The Green Party, Solidarity, People Before Profit, Rise, and The Workers’ Party. At least one candidate in every constituency endorsed the pledges, while in some constituencies some half to three quarters of candidates declared their support. The pledges call on candidates to Support a ban on trade with Israel’s illegal … Continue reading →

The Ireland-Palestine Solidarity Campaign is asking our members and supporters to make justice for the Palestinian people an issue in the 2020 Irish General Election. We have produced a short handout with three important issues to raise with canvassers on the doorsteps, or to contact candidates about, and have initiated a campaign asking the candidates to take our three #PalestinePledges in support of the Palestinian people’s struggle for freedom, justice and equality. The handout contains questions and important information related to • Support for a ban on trade with Israel’s illegal colonial settlements in Palestine • Support for an end … Continue reading →

In a letter published today in the Irish Times newspaper, Minister of State Finian McGrath and fifty other Irish TDs and Senators have called for an arms embargo to be placed on Israel, and for “an end to the bi-lateral arms trade between Ireland and the apartheid state”. In addition to independent Minister McGrath, the signatories include members of Sinn Féin, Solidarity-People Before Profit, Labour, the Green Party, Independents 4 Change and other independent members of the Oireachtas, who condemn “the shooting dead of some 205 [Palestinian] protestors, including 40 children, and wounding of more than 5,000 people by live … Continue reading →