The Palestine Podcast showcases a selection of lectures, talks and interviews featuring leading experts and social justice activists active on the Palestine-Israel issue. Brought to you by the Ireland-Palestine Solidarity Campaign. Click here to view all podcasts. ===== PP#26 – Shaun O’Neill on ‘Separate Lives: Stories of everyday life from the Occupied West Bank’ [2018-01-19] – (Download here) INFO: Join podcast-maker and student Shaun O’Neill on a journey around Jerusalem and the West Bank – Bethlehem and Ramallah – undertaken in Dec 2017 just days after Donald Trump’s illegal decision to recognise Jerusalem as the capital of Israel and move the US … Continue reading →

A report released today by Ireland’s largest multinational CRH confirmed the global cement giant has divested from its 25% stake in the Israeli cement market. The company has been a focus of a sustained campaign calling for such a divestment from the Ireland-Palestine Solidarity Campaign (IPSC) and other groups for over a decade, due to role its Israeli subsidiary Nesher Cement plays in supplying materials for the building of Israel’s illegal separation wall, checkpoints and settlements. In the report CRH stated that it had “completed 13 divestments in 2015, the largest of which was the disposal of CRH’s 25% equity … Continue reading →

Our latest infographic on East Jerusalem, looking at Israel’s policies of ethnic cleansing and discrimination against Palestinian Jerusalemites in numbers. Sources for the figures are The PLO Negotiations Affairs Department, the Israeli Committee Against House Demolitions, Applied Research Institution of Jerusalem, the Association for Civil Rights in Israel (ACRI), B’Tselem – The Israeli Information Center for Human Rights, and +972 Magazine. 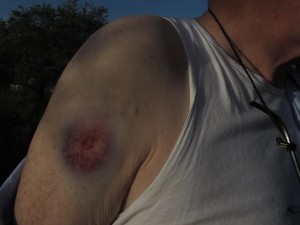 Earlier today, Good Friday, Irish cameraman Tommy Donnellen was shot in the arm by the Israeli military while filming a protest in the Palestinian village of Nabi Saleh in the occupied West Bank. Mr. Donnellan, who is from the Roscommon border, near Ballinasloe travelled to the West Bank last month. Today he sustained a wound from a rubber-coated steel bullet which punctured his upper right arm. Speaking from Nabi Saleh, Tommy Donnellan said: “I was filming the protest when suddenly I was shot in the arm by a rubber-coated steel bullet, fired by an Israeli soldier from about forty feet … Continue reading →

Yesterday, March 27th, the complicity and criminality of Irish multinational cement giant CRH in aiding and abetting the occupation was highlighted at the notorious Israeli checkpoint at Qalandia in the occupied West Bank. Palestinian activists mounted a large banner on Israel’s illegal Apartheid-Annexation Wall  condemning CRH’s role in providing cement through Nesher Israel Cement Enterprises Ltd for the Wall, the building of illegal settlements and Jerusalem light railway and other illegal projects in breach of the Geneva Conventions.   Video courtesy of Tommy D. Image courtesy of Haitham Khatib.