Palestine Podcast #43: ‘Palestinians in Israel: Between Dispossession and Discrimination’ 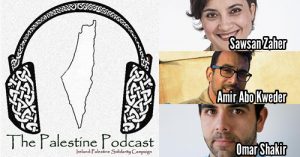 The Palestine Podcast showcases a selection of lectures, talks and interviews featuring leading experts and social justice activists active on the Palestine-Israel issue. Brought to you by the Ireland-Palestine Solidarity Campaign. Click here to view all podcasts. ===== PP#43 – Sawsan Zaher, Amir Abo Kweder and Omar Shakir on ‘Palestinians in Israel: Between Dispossession and Discrimination’ [2020-06-17] – (Download here) INFO: In this episode of the Palestine Podcast, Sawsan Zaher, Amir Abo Kweder and Omar Shakir discuss the experience of the Palestinian Citizens of the Israel. They are those who managed survive the 1947-49 Nakba and stayed inside what would … Continue reading →