It seems increasingly likely that Fianna Fail and Fine Gael will form a coalition government together very soon. We believe that it is important that even in the midst of the Covid-19 pandemic and the incredible strain and, sadly, increasing tragedy, that has been placed upon people in Ireland as a result, that we do not forget about our sisters and brothers in Palestine. We are asking our supporters to write to Taoiseach Leo Varadkar, Tánaiste and Minister for Foreign Affairs Simon Coveney, Fianna Fail leader Micheál Martin, Fianna Fail foreign affairs spokesperson Seán Haughey, and to your local Fianna … Continue reading →

On April 15th Fianna Fail and Fine Gael published a ‘framework document’ for the formation of the next government. Unfortunately this document does not contain any commitment to passing the Occupied Territories Bill that would ban trade with Israel’s illegal settlements in Palestine. However it is important to note that, as Fianna Gael Chairman Martin Hayden said, “this is not a program for government, but starting point to facilitate negotiations with smaller parties and independents in order to develop a government.” Furthermore, Fianna Fáil TDs have indicated to us that they would like to see the Occupied Territories Bill form … Continue reading →

These weeks are difficult times for all of us – and as we all need to protect our health, we also need to ensure that these are times of mutual care and not of complicity and corporate profit. It is now that our capacity to show solidarity is the most important. In this spirit, our partners in Stop the Wall and the European Coordination of Committees and Associations for Palestine (ECCP) have launched today Monday 30 – Palestinian Land Day and the anniversary of the Gaza initiated Great Return March – a petition to ask the EU #HealthcareNotWarfare: Stop using … Continue reading →

#DeactivateAirbnb: Join to campaign the deactivate Airbnb accounts on Nakba Day, 15th May

Airbnb just did the worst thing. After announcing they’d ban vacation rentals in illegal Israeli settlements from their platform, Airbnb did a complete reversal and will continue to allow rental suites on the ruins of Palestinian lives and land. This is Palestinian land that Palestinians are not allowed to enter, but Airbnb has decided they’re ok helping everyone else going to this stolen land for their vacations. This is a despicable decision, and we’re going to show them what we think of this with a Deactivate Airbnb day of action. We’ll take action on May 15th, Nakba Day – a day … Continue reading →

We received some absolutely huge news this week as Fianna Fail announced its intention to support Sen. Frances Black’s bill to ban trade with Israel’s illegal settlements in Palestine. This shift of position is a result of the lobbying carried out by all of you – a real victory for people power! – so we would like to sincerely thank you. With Fianna Fail’s support, this bill will pass in the Seanad, moving on to the committee stage – this will be an historic first step in outlawing the profiteering from the proceeds of illegally colonised land. Those who have … Continue reading → 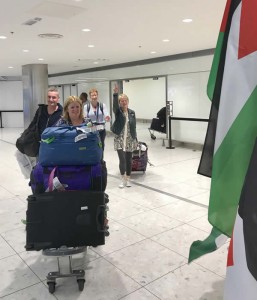 Dear friends, in case you missed this shocking news last week, while en route to occupied Palestine four Irish people were seized by Israeli authorities in Ben Gurion airport and deported. Below is a statement issued by the four deportees which includes a call for you to write to the Minister for Foreign Affairs Simon Coveney (minister@dfa.ie) voicing your concerns about this arbitrary expulsion of human rights activist to stop them from bearing witness to the effects of Israel’s apartheid regime. Of course, while these deportations pale in comparison to the treatment meted out to Palestinians on a daily basis, … Continue reading →