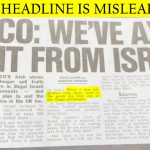 An article appeared in The Irish Sun yesterday which was headlined “Tesco: We’ve axed fruit from Israel”.

This headline is very misleading. This statement from Tesco is simply a reaffirmation of Tesco’s previously held position that they won’t use settlement products in their Tesco brand range.

While this is to be welcomed by Palestinian rights campaigners, it unfortunately does not say anything about not stocking settlement goods from other brands, nor about refusing to deal with complicit companies that have operations in the illegal settlements (eg Mehadrin).

Furthermore, even in the article itself, it states “it does still sell products from Israel”. In an email to the IPSC, Tesco has stated that:

“We currently have one own brand line of dates that is grown in Israel but packed in the West Bank, so the product is labelled as ‘West Bank (Israeli settlement produce)’. We are planning to stop using that facility from September this year and are not currently sourcing any other own brand products from the West Bank.”

So, Tesco is not yet standing on the right side of history, but has made a small step in that direction. Every little helps. We hope this clarifies the issue, and that our supporters keep politely asking Tesco to boycott all Israeli products.