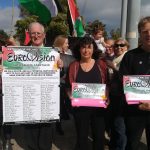 On Wednesday 26th September, representatives of the Irish campaign for a boycott of Eurovision 2019 in Israel held a meeting with the Director General of RTÉ Dee Forbes. At the meeting, at which Rory Coveney, Strategic Advisor to the Director General of RTÉ, and Michael Kealy, Head of RTÉ’s delegation for Eurovision, were also present, a petition signed by over 11,000 people was handed in. The campaigners explained the strength and breadth of support for a boycott in Irish society – including from Irish and international public figures like Roger Waters, Brian Eno, Wolf Alice, Christy Moore, Mary Black, Charlie McGettigan, Mike Murphy, Carrie Crowley, Paul Brady and Doireann Ní Bhriain and many others – due to Israel’s oppression of the Palestinian people. 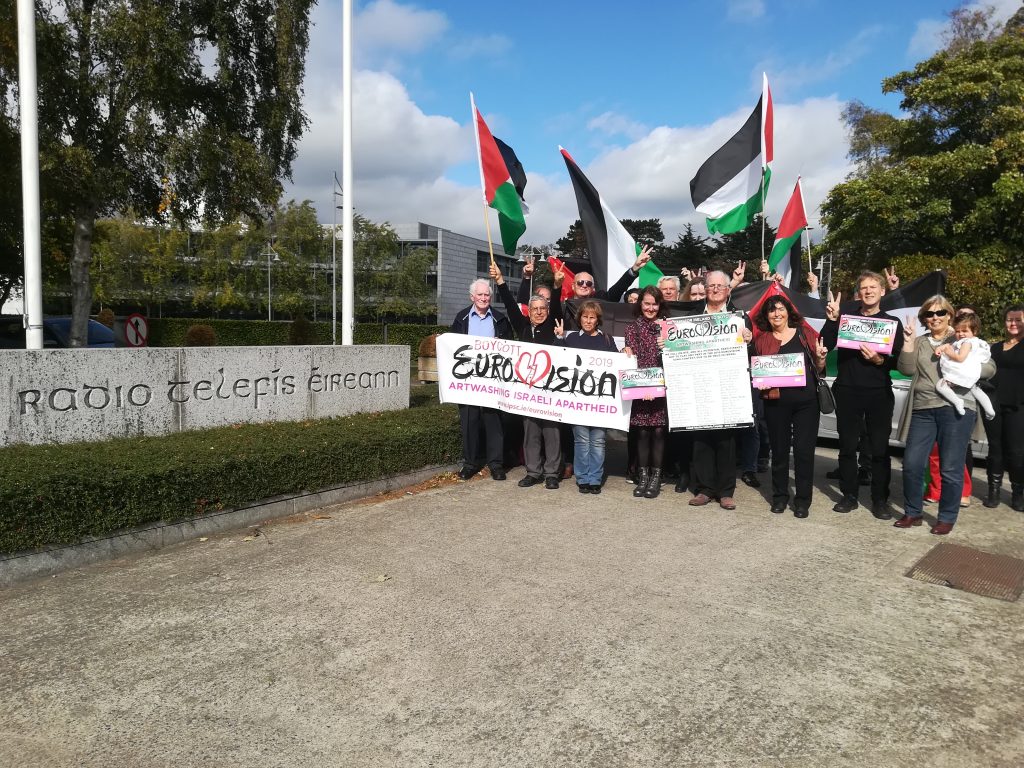 During the meeting the RTÉ representatives stated that they “will take away all that has been said and think about it”, and noted that there “will not be any sanction against anyone from within RTÉ who doesn’t wish travel on conscientious grounds.” RTÉ also said that they are “well aware that the Irish people are very concerned about and supportive of Palestinians” and that they “will not just be covering it as an entertainment event, and bearing in mind everything that has been discussed [they] will be covering it more widely.”

John Dorman, Vice Chairperson of the Ireland-Palestine Solidarity Campaign said: “We thank RTÉ for meeting us today and allowing us the opportunity to speak on behalf of over 11,000 people who are deeply concerned about the ongoing oppression of the Palestinian people by Israel and who are asking RTE not to have any involvement in the Eurovision if it is to be held in Israel in 2019.”

“RTÉ may argue that the Eurovision is a cultural event that should not be politicised but that is exactly what Israel is doing, shamelessly using the Eurovision as part of their Brand Israel strategy. Israel is determined to put forward a pretty face to hide its ugly regime of settler colonialism, apartheid and brutal military occupation. RTE representing Ireland, the first country to say no to Apartheid South African 40 years ago, should now listen to the Irish people by taking a stand and saying No to Apartheid Israel by withdrawing from the Eurovision. This simple act of solidarity with the oppressed would send out a very powerful message to Israel that we will not stand on the wrong side of history and will support the Palestinian people in their darkest hour,” Mr. Dorman said. 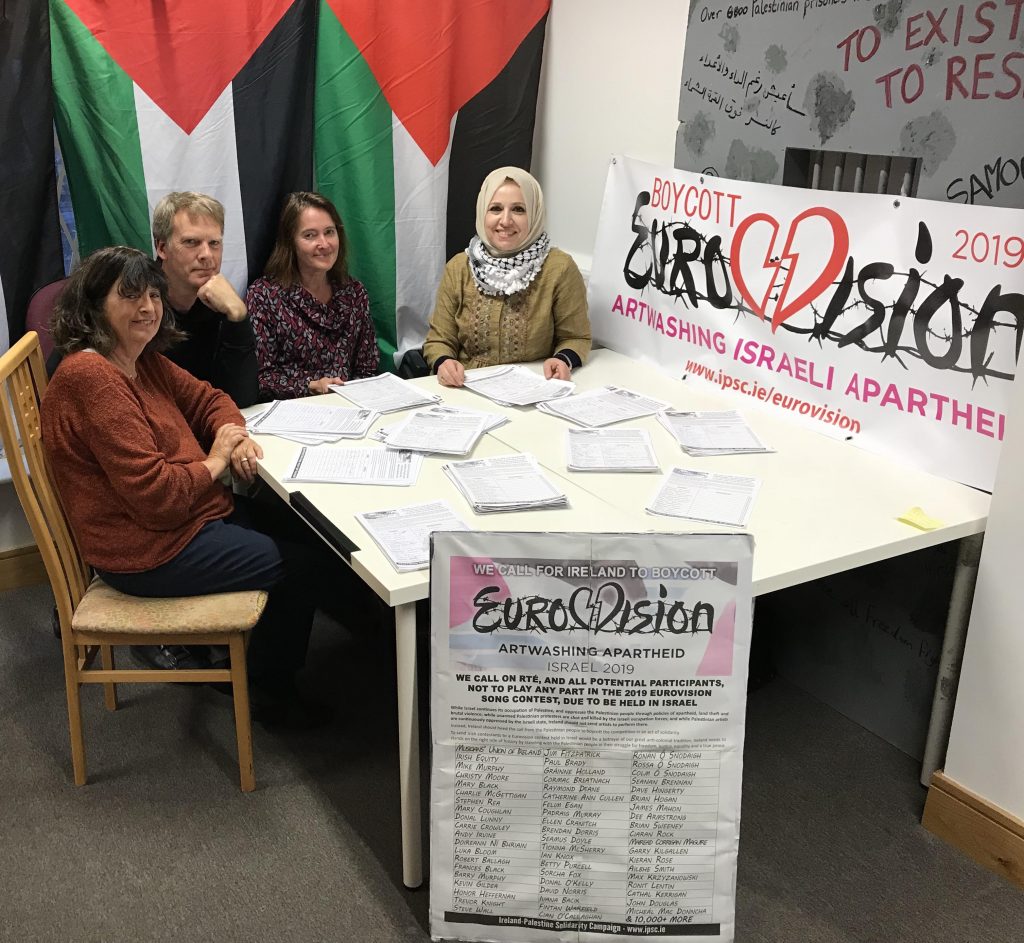 Betty Purcell, well known former RTÉ producer and former member Irish Human Rights and Equality Commissioner said: “I am aware that a number of RTE journalists and programme personnel are deeply concerned about this. They are seeking trade union and legal advice on their position, should they refuse to travel to Apartheid Israel. RTÉ has a chance here to be on the right side of history, to heed the petition of over 11,000 Irish people who would like their national broadcaster to refuse to support the whitewash of Israeli war crimes, and to not travel to Israel for Eurovision in 2019.” 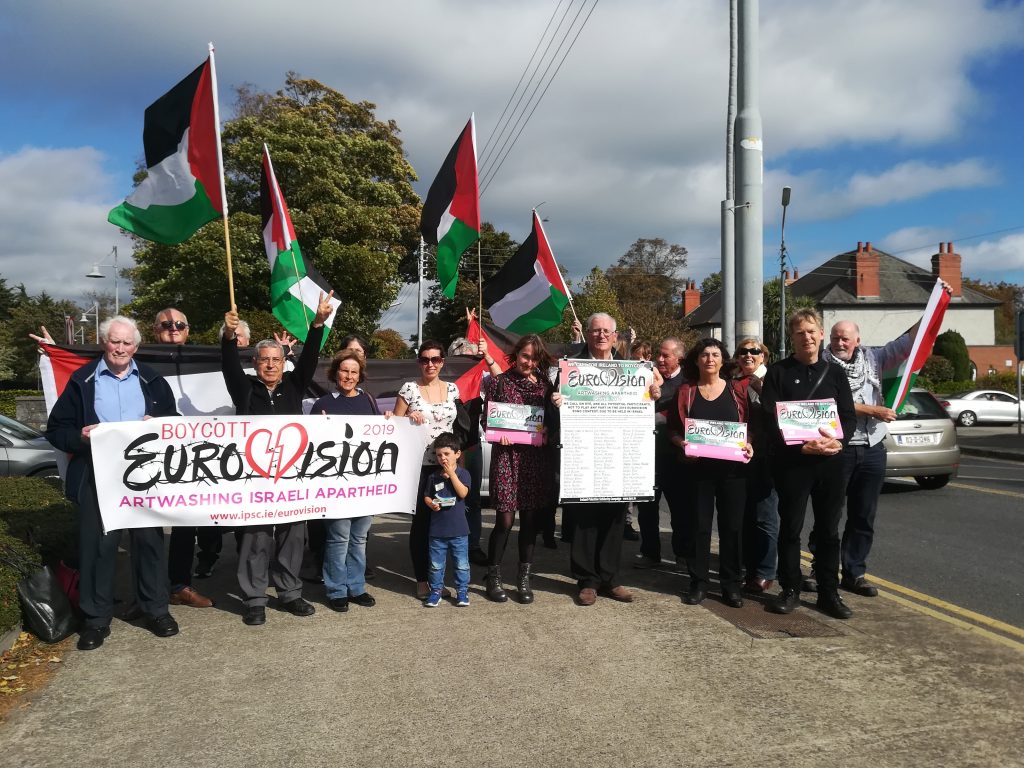 Catherine Ann Cullen, a poet, former Eurovision jurist and member of PalFest Ireland, and organisation that fosters cultural links between Irish and Palestinian artists, said: “As a signatory of the Irish Artists’ Pledge to Boycott of Israel, which more than 630 cultural workers have signed, I am particularly concerned about fellow artists under Israeli occupation. I was on the Irish Eurovision jury with Johnny Logan many years ago and it was a hugely enjoyable and light-hearted experience. Taking any part in a Eurovision in Israel, however, could not be light-hearted. While Israel continues to refuse equality to Palestinians, while Palestinians cannot attend events or travel freely inside or outside of Israel, the Eurovision is tainted with apartheid. 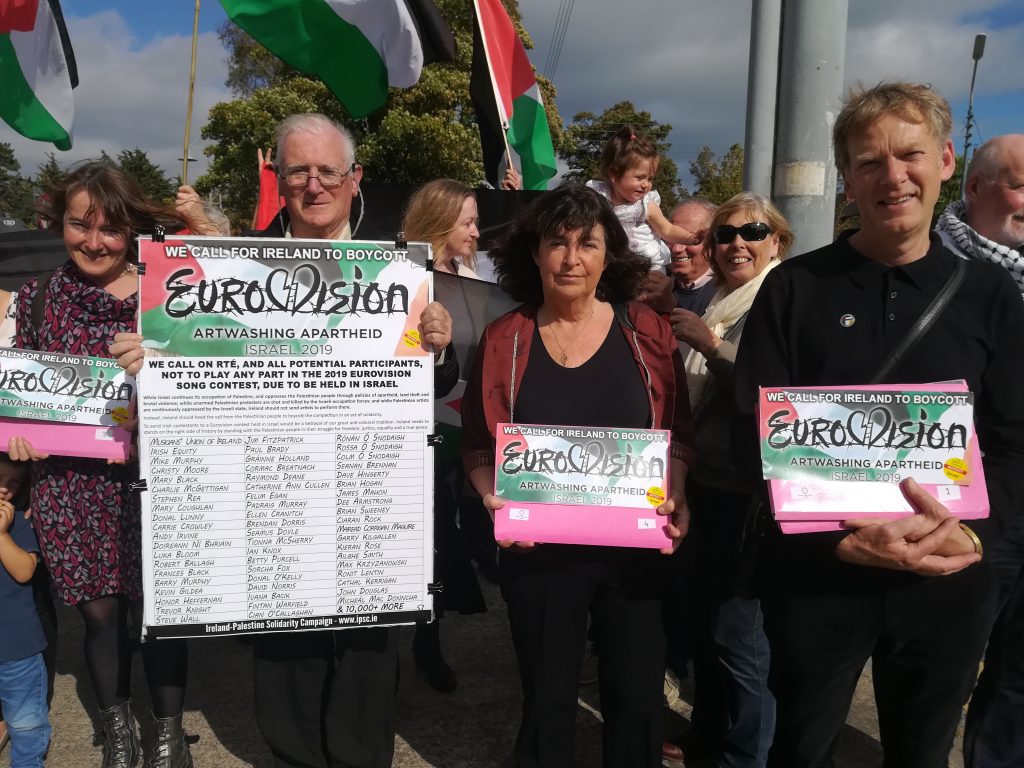