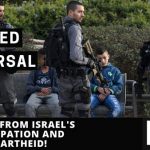 #StopG4S was launched by Palestinian civil society organizations in 2012, to support a historic hunger strike by Palestinian political prisoners. Trade unions, churches, and grassroots movements across over 25 countries joined the campaign that cost G4S contracts worth millions of dollars.

The #StopG4S campaign has already shown its impact. In December 2016, G4S sold its subsidiary, G4S Israel, to the Israeli equity fund FIMI. Until then, G4S was responsible for running Israeli prisons, where Palestinian political prisoners are held without trial and subjected to torture and ill-treatment. G4S Israel also provided equipment and services to Israeli military checkpoints, illegal settlements and to military and police buildings.

However, G4S, and now Allied Universal, continue to be complicit in violations of international law through its 25 per cent stake in Policity Corporation.

Policity is the national police training centre that trains all Israeli police. The training these officers receive includes crowd control, house raids, interrogation techniques, target shooting, and undercover operations – all tactics aimed at repressing Palestinians, and tactics which lead to arrest and imprisonment.

BDS groups and other human rights organizations around the world have signed a letter calling on Allied Universal to divest from Policity Corporation. But Allied executives need to hear it from you, too.

You can also use the link below to email Allied Universal executives urging them to cease their involvement in occupation and apartheid!