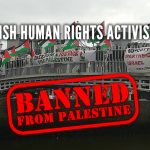 Although long suspected, the Ireland-Palestine Solidarity Campaign (IPSC) yesterday learned via news reports that the organisation is one of 20 human rights advocacy groups on an official Israeli state blacklist, meaning that its members are banned from entering Israel, and thus, from entering Israeli-occupied Palestine.

The Israeli apartheid regime fears solidarity so much it seeks to stop us from visiting our friends and colleagues in the Palestine-Israel region.

Although appalling, saddening and manifestly anti-democratic, the IPSC views its appearance on this list as a badge of honour and a vindication of our work in solidarity with the people of Palestine over the past 16 years. We will not stop our campaigning work for freedom, justice and equality for the Palestinian people.

This anti-democratic move is to be robustly condemned – and the IPSC will be making representations to the Irish government and elected representatives.

Looking at the other groups on the list, we note that we are in good company; among the groups banned is the American Friends Service Committee, a Quaker organisation which received the Nobel Peace Prize for rescuing refugees from the Nazis during the Second World War, Jewish Voice for Peace, a Jewish group that acts in solidarity with Palestinians, and the Palestinian Boycott National Committee, the leadership of the global Boycott, Divestment and Sanctions (BDS) movement.

We must remember, however, that it is merely the latest draconian attempt to defeat the growing and increasingly successful BDS movement, the global movement that seeks to pressure Israel into ending its occupation of Palestine, obeying international law and ensuring Palestinians enjoy their inalienable rights, including the Right of Return for Palestinian refugees and full equality for Palestinian citizens of Israel. The right to campaign for BDS has been defended by both the Irish government and the European Union.

The ban, while undoubtedly meant to intimidate Palestinian rights activists, and to isolate those in occupied Palestine from their supporters abroad, will only serve to further expose the true anti-democratic nature of the apartheid state.

It begs the questions: What kind of state sets ideological barriers that proscribe members of entirely legal, well respected, non-violent, human rights advocacy organisations from entry? What does this state want to hide from the world?

It is clear that Israel fears people travelling to Palestine to see the brutal military occupation for themselves and to make personal connections with Palestinians and Israelis working for justice on the ground. Last year four members of an Irish fact-finding group were banned and deported – many others from all over the world have faced the same fate before and since this incident.

Naturally, the move will have the most hurtful impact upon Palestinians in the diaspora who are active in struggles for the rights of their people, who will be unable to visit their homeland to visit family. As the IPSC Chairperson Fatin Al Tammi noted, “For me as a Palestinian, it means a lot that they are going to ban me from going to see my family and people. It is absolutely horrible.”

Nevertheless, we do not believe people should be overly worried about visiting Palestine. It seems unlikely – outside of illegal spying entailing severe violations of data protection laws – that the Israeli state could know who ordinary members of the IPSC or any of the other groups are. The IPSC continues to urge people who can to visit Palestine to meet with amazing people struggling for freedom, justice and equality under Israel’s apartheid regime.

It is also clear that Israel fears the effect of the global BDS movement for Palestinian rights. The fact is that today Israel has an army of well-paid advocates and propagandists who seek to delegitimise the Palestinian campaign for a boycott of Israel. It employs students to post Israeli state propaganda, it is involved in setting up military-style situation rooms in Israel and the US to spread lies about the BDS movement, and it helps create apps to enable agents to swarm online targets. The Israeli government is paying journalists and newspapers for favourable coverage and to lie about BDS, while at the same time pressuring social media sites to ban Palestinian journalists and activists.

Meanwhile, just last week it was revealed that, on top of the millions already invested, the Israeli government and private donors are to pump an extra $72 million into fighting against the global BDS movement. The largely volunteer-led BDS movement would be lucky if all the groups involved had a combined 1/100th of that budget.

These are the forces ranged against the BDS movement today – and there is literally no low they will not stoop to, no slur they will not throw, nor no lie they will not tell, to defame those who are fighting for justice for Palestinians.

Yet despite all of this, the global movement for Palestinian freedom only continues to grow; for example, last week Irish Minister of State, Finian McGrath TD, called for sanctions on the Israeli state. Obviously this is a position that we fully support, and one that is becoming increasingly widespread even at elite levels of society in Ireland and abroad.

This growth shows no signs of abating, especially as we see the Israeli state increase its brutality and repression, such as killing, injuring or jailing unarmed protesters, many of them children, including the teenage girl Ahed Tamimi, poets, academics and teachers, anti-apartheid activists and feminist parliamentarians. Also last week, on the back of Trump’s announcement to recognise illegally annexed Jerusalem as the capital of apartheid Israel, the Israeli ruling party (Likud) announced that it would begin to annex all illegal Israeli colonial settlements in Palestine – in direct contravention of international law and the Geneva Conventions.

As citizens of the world see inaction on behalf of the states that supposedly represent them, anger and frustration will increasingly transform into action – and BDS is the most effective way for internationals to support Palestinians in struggle. In Ireland, we also urge people to join or donate to the to support the BDS movement and the Palestinian struggle.

The renowned and outspoken Irish artist Robert Ballagh, a signatory to the Irish Artists’ Pledge to Boycott Israel, often speaks of the time he met with Nelson Mandela, and asked him what role the boycott of apartheid South Africa played?  Mandela told him that “the boycott was one of the most important weapons in the struggle against apartheid.”

Now, as then, a campaign of Boycott, Divestment and Sanctions can – indeed must – play a similar role in helping to end Israeli apartheid and ensuring freedom, justice, equality and a true peace for Palestinians. We urge all people appalled by Israel’s crimes against the Palestinian people to get active. Let’s make 2018 the #YearOfBDS.

JOIN OR DONATE TO THE IPSC TODAY.