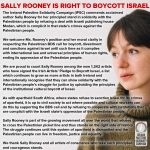 We welcome Ms. Rooney’s position and her moral clarity in respecting the Palestinian BDS call for boycott, divestment and sanctions against Israel until such time as it complies with international law and universal principles of human rights, ending its oppression of the Palestinian people.

We are proud to count Sally Rooney among the now 1,342 artists who have signed the Irish Artists’ Pledge to Boycott Israel, a list which continues to grow as more artists in both Ireland and internationally recognise that they can show solidarity with the Palestinian people’s struggle for justice by upholding the principles of the institutional cultural boycott of Israel.

As with apartheid South Africa, where states refuse to sanction Israel for its crimes of apartheid, it is up to civil society to act where possible and cultural workers can do this by supporting the BDS call and by refusing to cooperate with institutions that are complicit with the Israeli state’s oppression of the Palestinian people.

Sally Rooney is part of the growing movement all over the world that refuses to cross the Palestinian picket line and thus stands on the right side of history. The struggle continues until this system of apartheid is dismantled and the Palestinian people can live in freedom, justice and equality.

We thank Sally Rooney and all artists of conscience who take such principled and courageous stands.