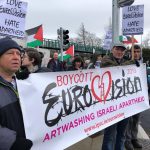 With the announcement of Sarah McTernan as Ireland’s entry to the Eurovision in Israel, the Irish Campaign to Boycott Eurovision 2019 in Apartheid Israel held a large protest out RTÉ studios in Donnybrook. Campaigners handed in an additional 5,600 signatures to a petition calling on RTÉ and Ms. McTernan not to take part in the Eurovision, bringing the total number of signatures to over almost 17,000.

A new petition calling on Sarah McTernan not to go to Apartheid Israel has been launched – you can sign it here! 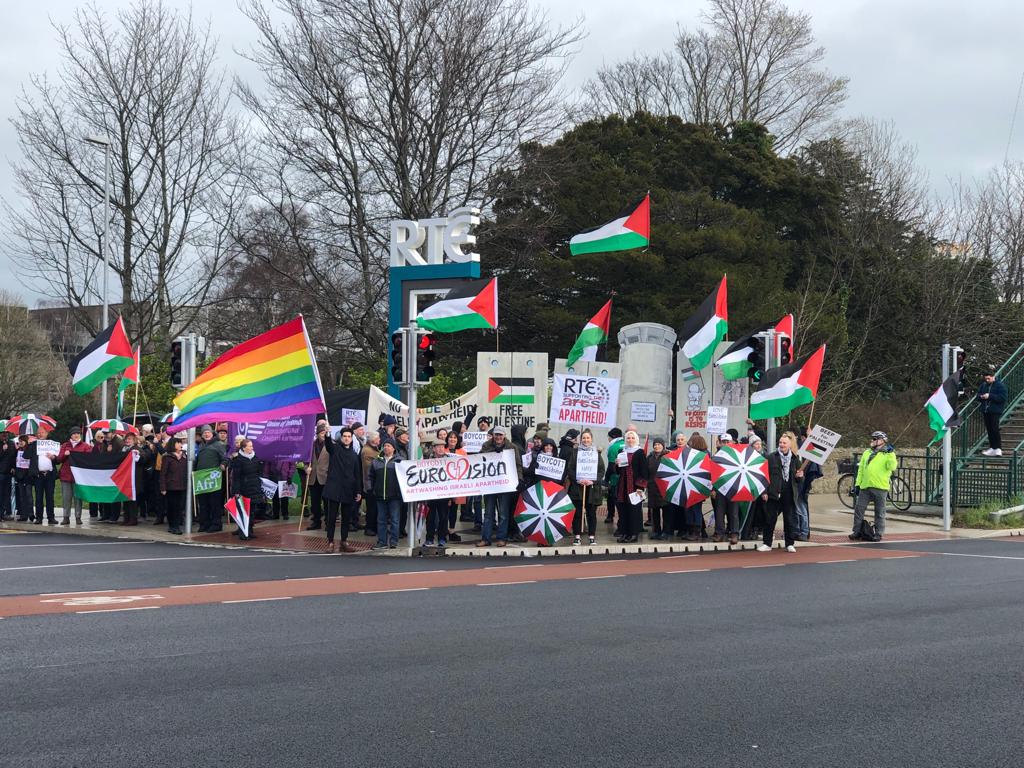 A protest was also held outside the RTÉ Regional Studios in Waterford by supporters of the Campaign. 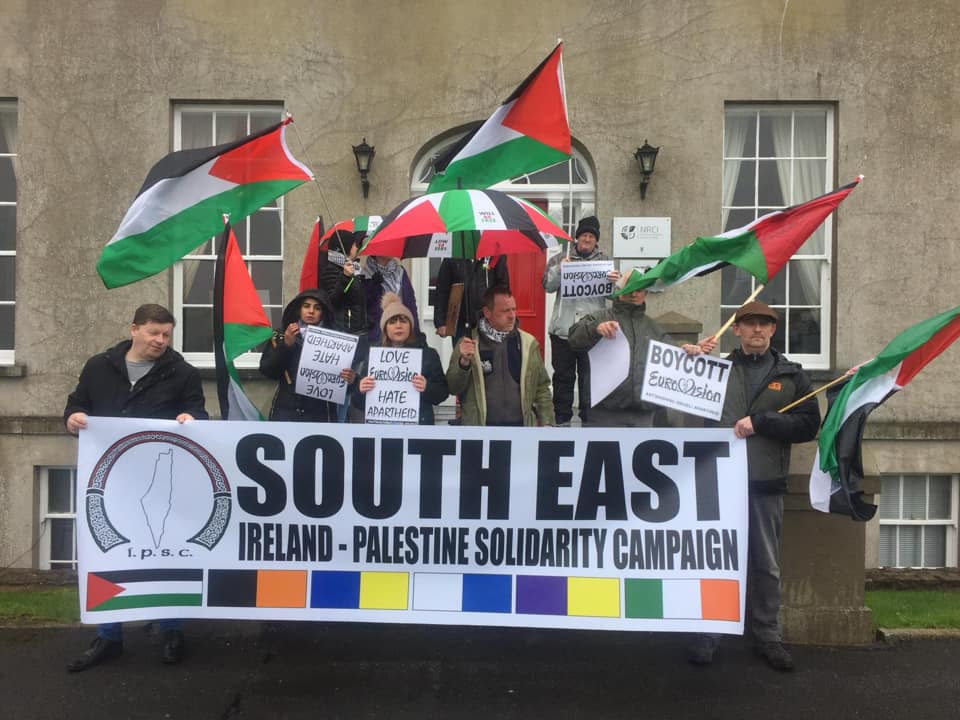 Addressing her comments to the Irish contestant, Zoë Lawlor, a spokesperson for the Campaign said “While we congratulate Sarah McTernan on her selection, which is a great honour for her, we must unfortunately draw the her attention to the call from Palestinian artists, journalists, LGBTQIA+ and civil society organisations for artists of conscience to refuse to take part in the Eurovision in Israel due to that state’s ongoing brutal oppression of the Palestinian people.”

Ms. Lawlor appealed for Sarah McTernan to refuse to take part: “Ireland has a proud tradition of standing with the oppressed and against injustice and we sincerely hope that Sarah McTernan will take this opportunity to stand on the right side of history by listening to the Palestinian and international calls for a boycott. It would be a principled stand for freedom, justice, equality and a show of solidarity and empathy with the oppressed.”

Ms. Lawlor drew attention to Israel’s atrocious human rights record as a reason for Ireland to refuse to take part in the Eurovision: “Israel has an appalling human rights record, has repeatedly been accused of war crimes by the United Nations and human rights organisations, and routinely uses cultural events to whitewash its crimes against the Palestinian people. Just last week a UN Commission of Inquiry concluded that Israel likely committed war crimes and crimes against humanity in its attacks on unarmed protesters in Gaza last year. Israeli forces killed 183 Palestinians, including 35 children, journalists and paramedics, people who were demonstrating for their legally guaranteed Right of Return to the homes they were ethnically cleansed from in 1948. We believe that for an Irish artist to perform just down the road from where Palestinian refugees are being shot down by Israeli snipers should be absolutely unconscionable.”

Ms. Lawlor continued by pointing out the politicised nature of the contest: “The notion that the Eurovision in Israel is “non political” is simply not credible, in fact Israel has made this year’s Eurovision explicitly militaristic and political in nature. This is especially so as the contestants will be expected to perform in front of 500 soldiers from the Israeli military, and they will be staying on a village built on the ethnically cleansed ruins of the Al-Manshiyya quarter of Jaffa whose indigenous residents are long term refugees forcibly exiled by Israel. Furthermore it has been reported that the Israeli state broadcaster will screen ‘visual postcards’ featuring locations in Israel’s colonial settlements in occupied territories in Palestine and Syria, and attempt to ‘normalise’ these grave violations of international law.”

Ms. Lawlor continued: “Furthermore, despite a supposed commitment to allow Eurovision fans to enter the state ‘regardless of political opinions’, Palestinian fans – whether from the occupied Palestinian territories or the refugee diaspora – are highly unlikely to be allowed entry to attend the contest, reflecting Israel discriminatory apartheid system imposed upon for Palestinians.”

Ms. Lawlor concluded by reiterating the widespread support for the call for a boycott in Ireland: “The boycott call has been supported by over 16,500 people in Ireland, the Musicians Union of Ireland, Irish Equity and many prominent figures associated with former Eurovisions, as well as respected public figures in the arts, humanities and human and civil rights fields for. In the region of 100,000 people all over Europe, including more than 100 LGBTQI organisations, have called for a boycott, and most importantly of all, it is what Palestinians themselves are asking us to do. We ask Sarah McTernan to respect their call and refuse to take part in the Eurovision in Apartheid Israel.” 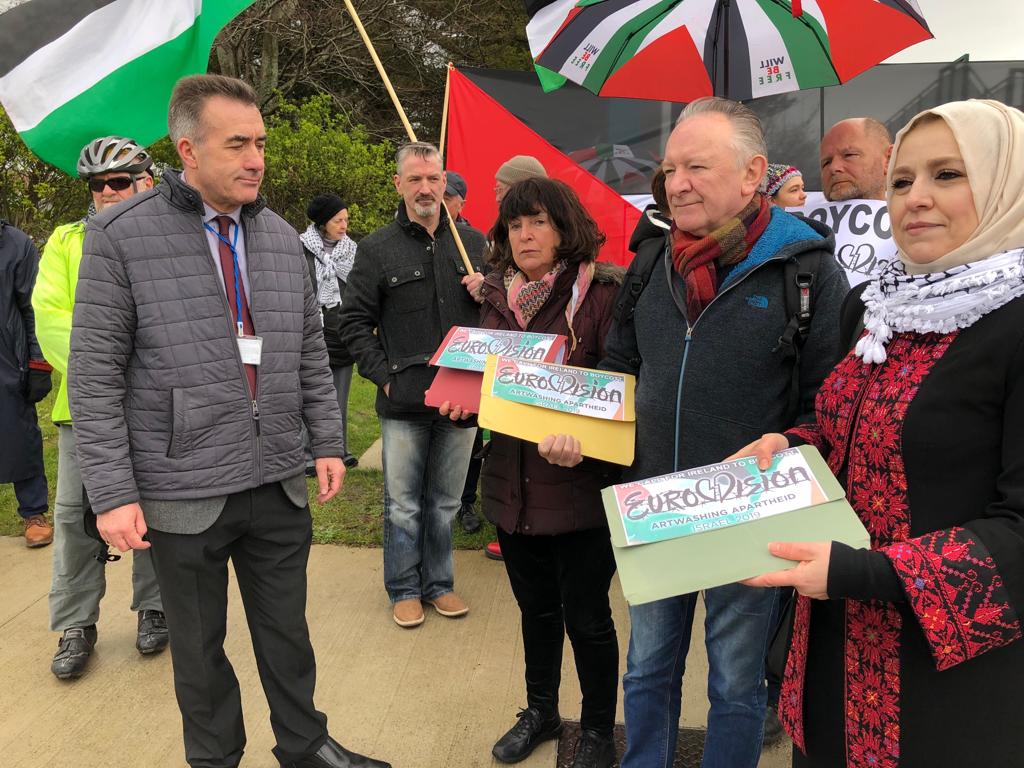 Donal Lunny, Betty Purcell and Fatin Al Tamimi hand in over 5,600 signatures to the petition, which now totals almost 17.000 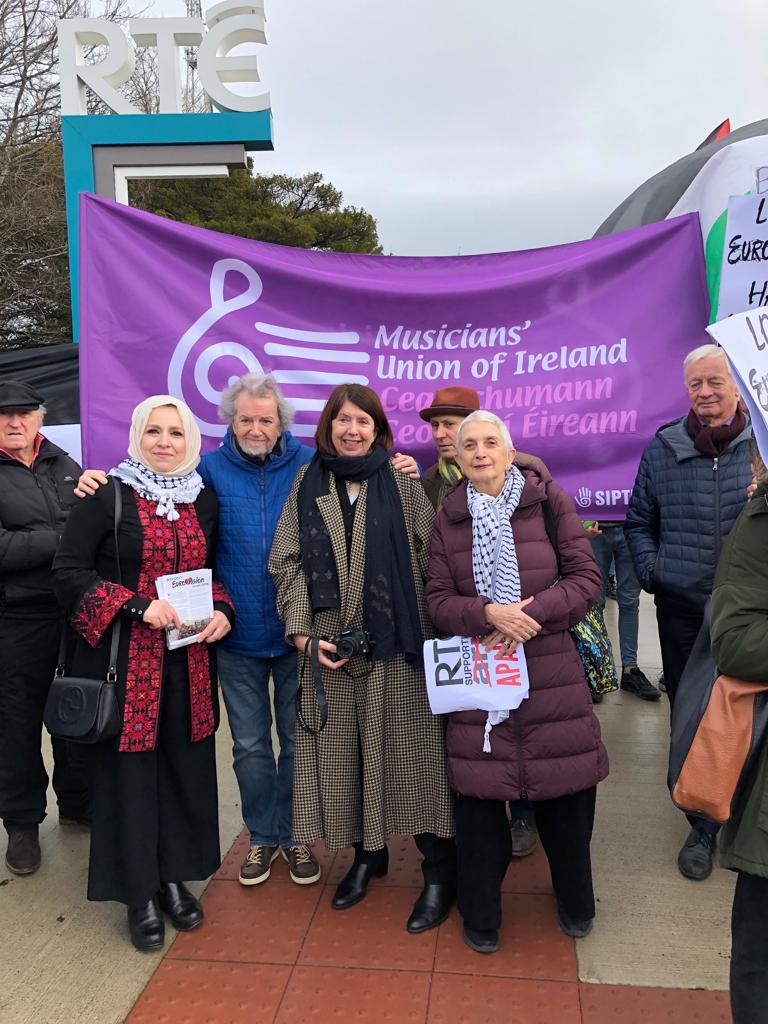 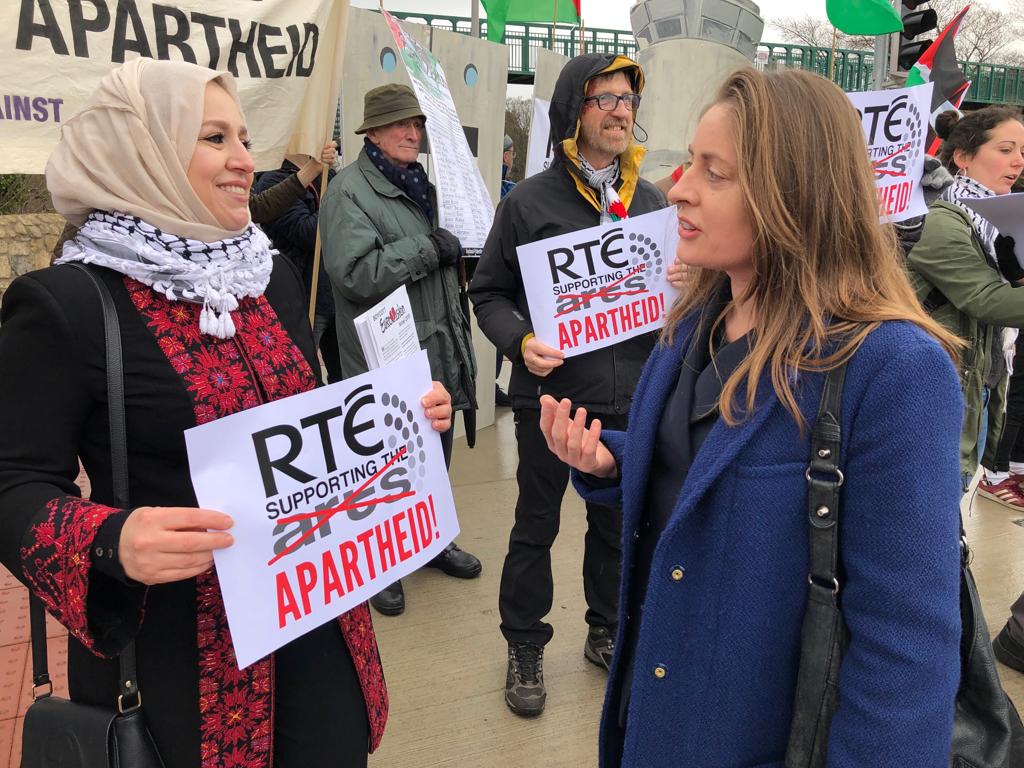 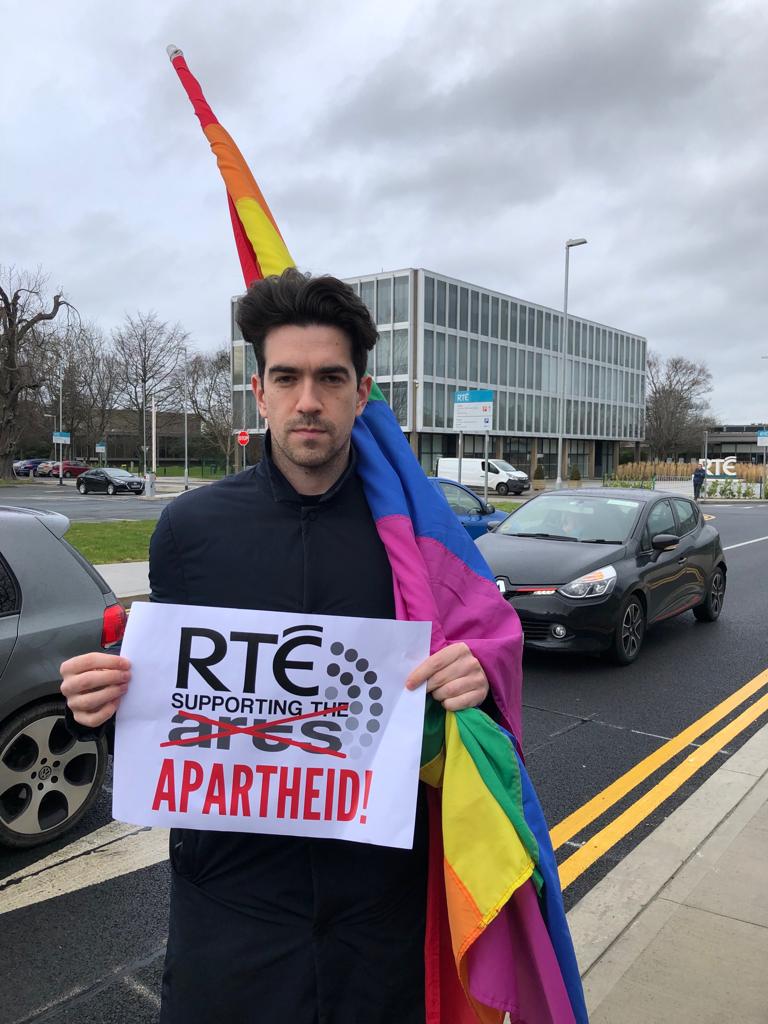 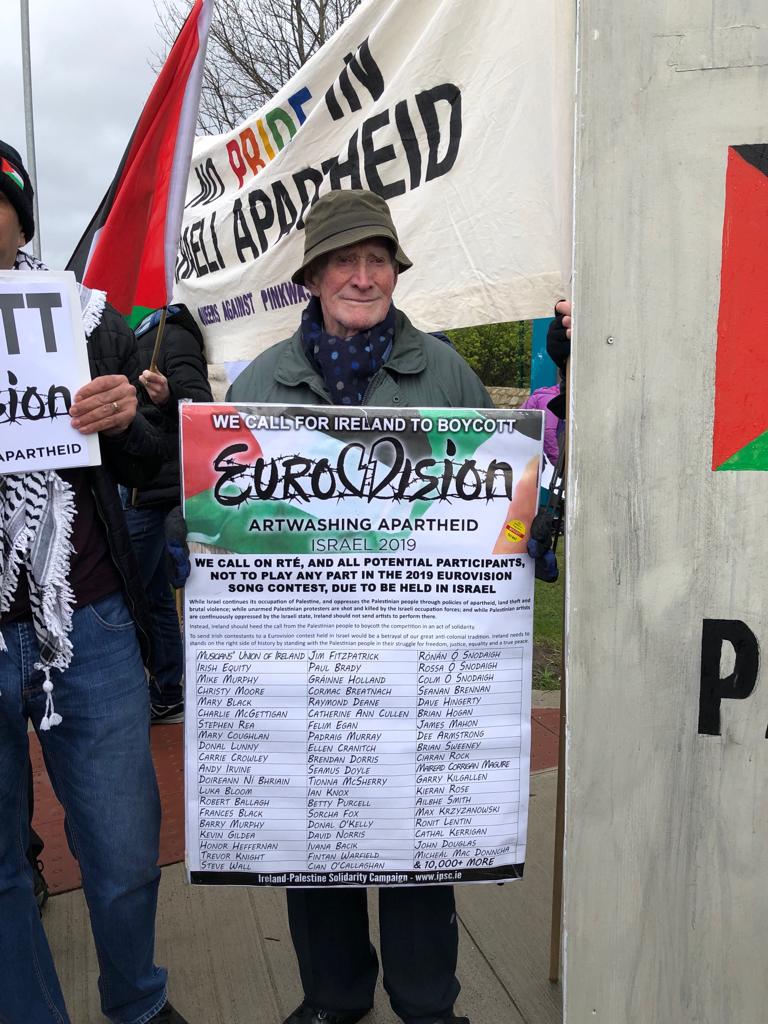 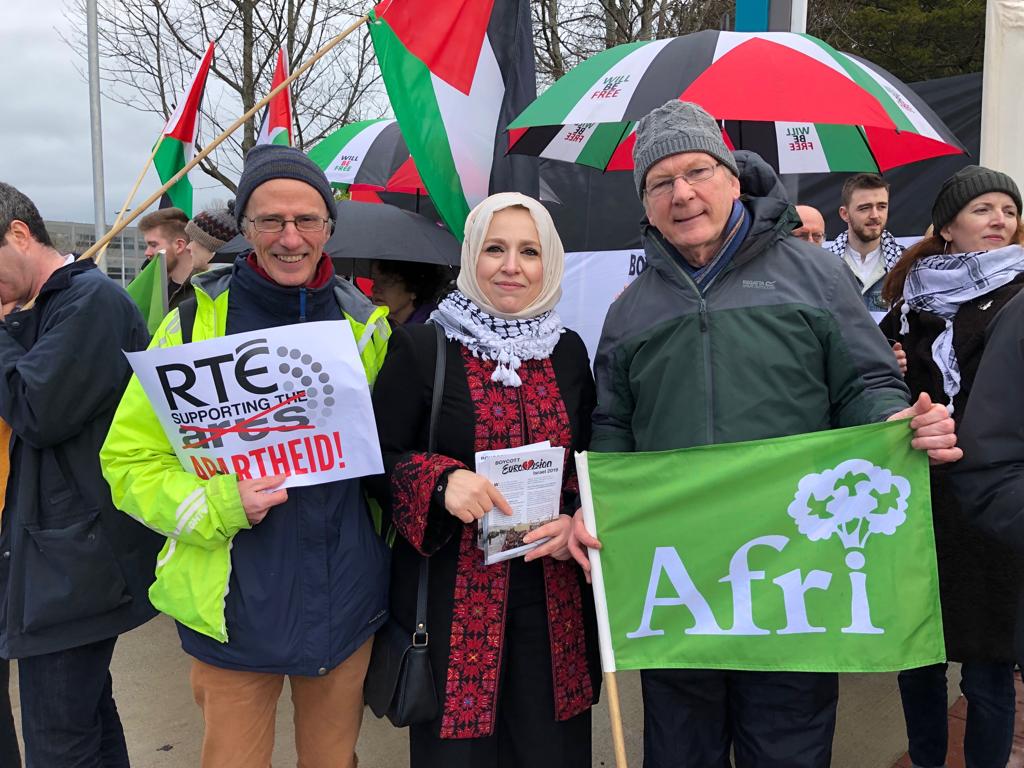 Action From Ireland show their support 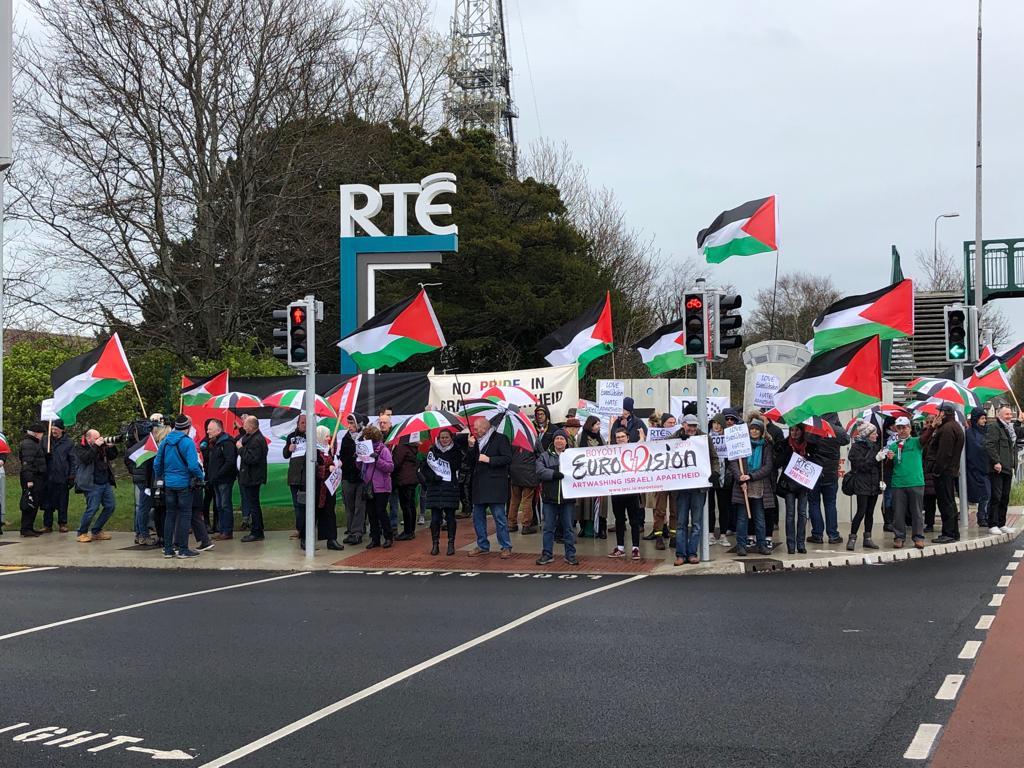 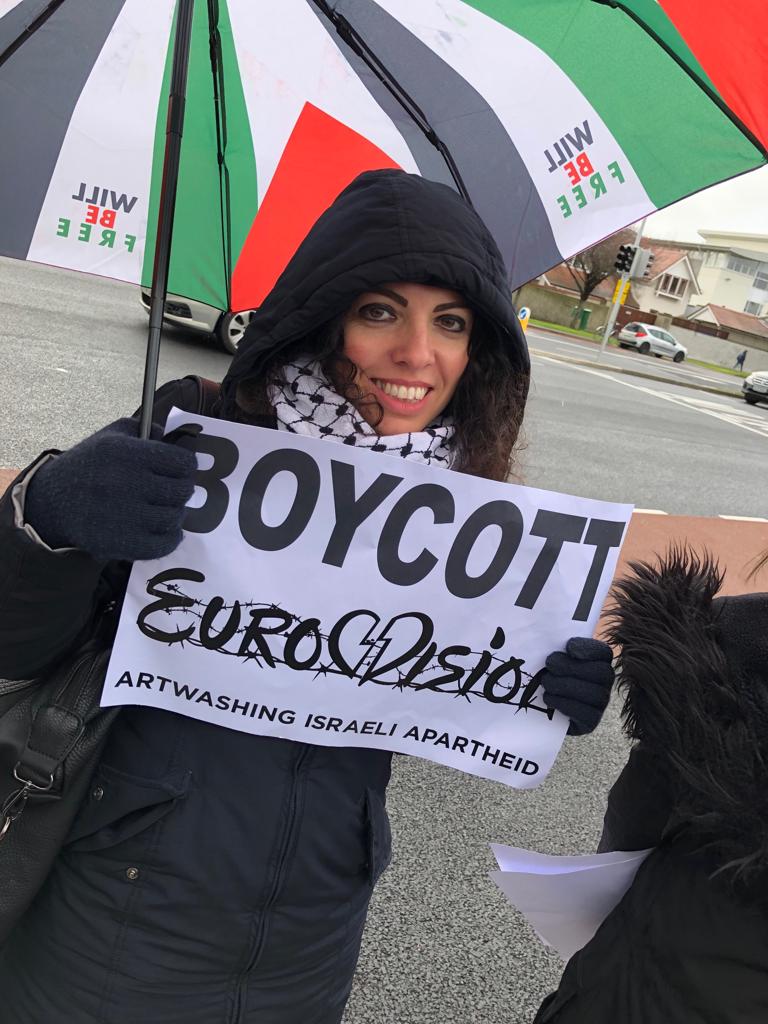 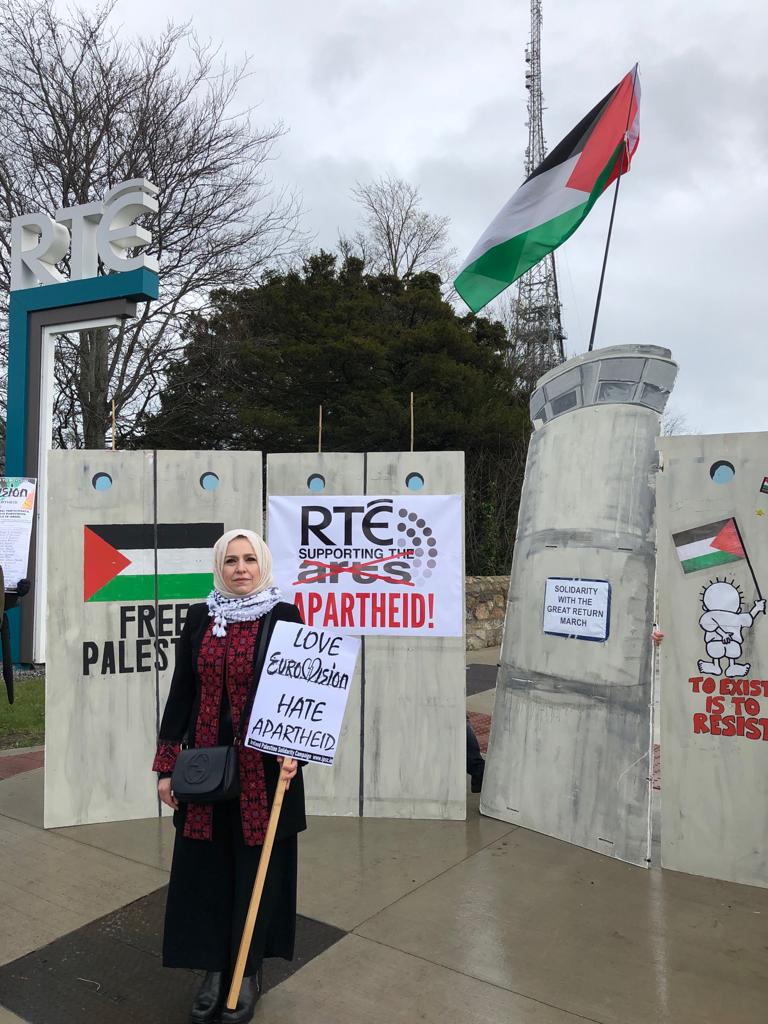 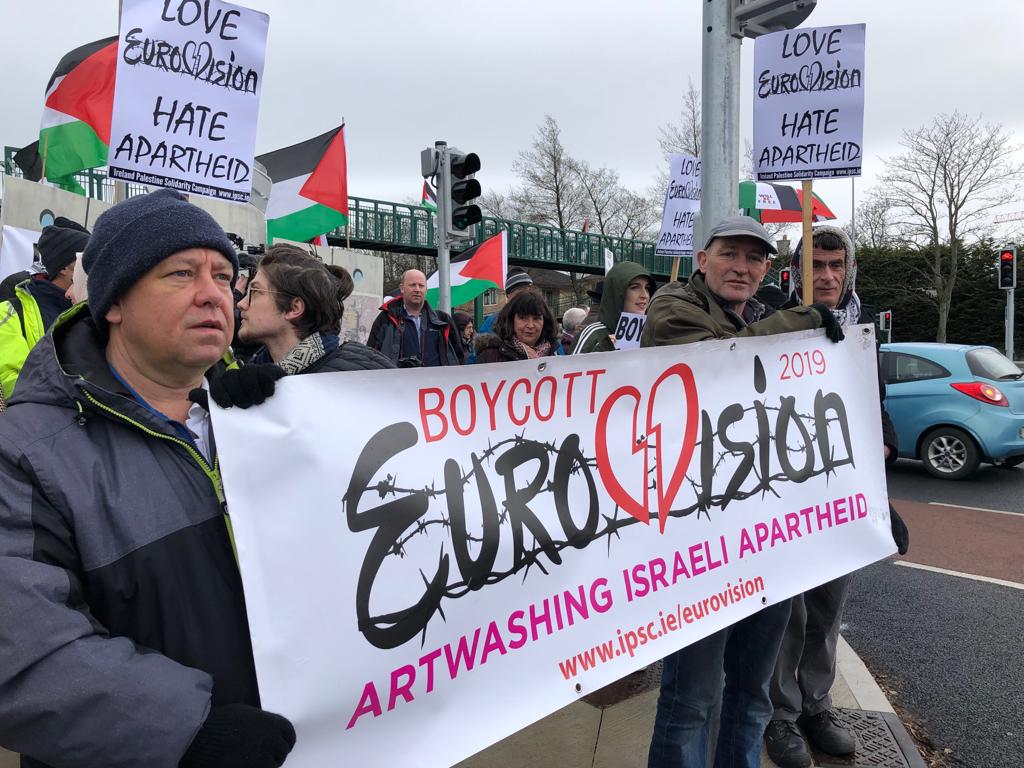 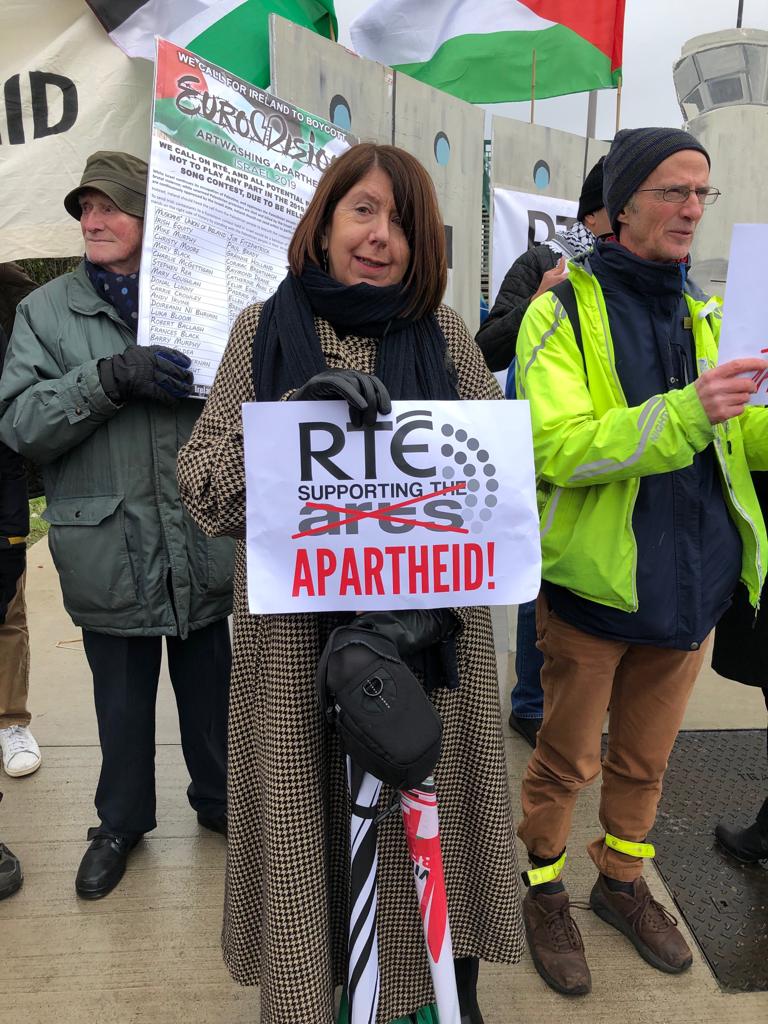 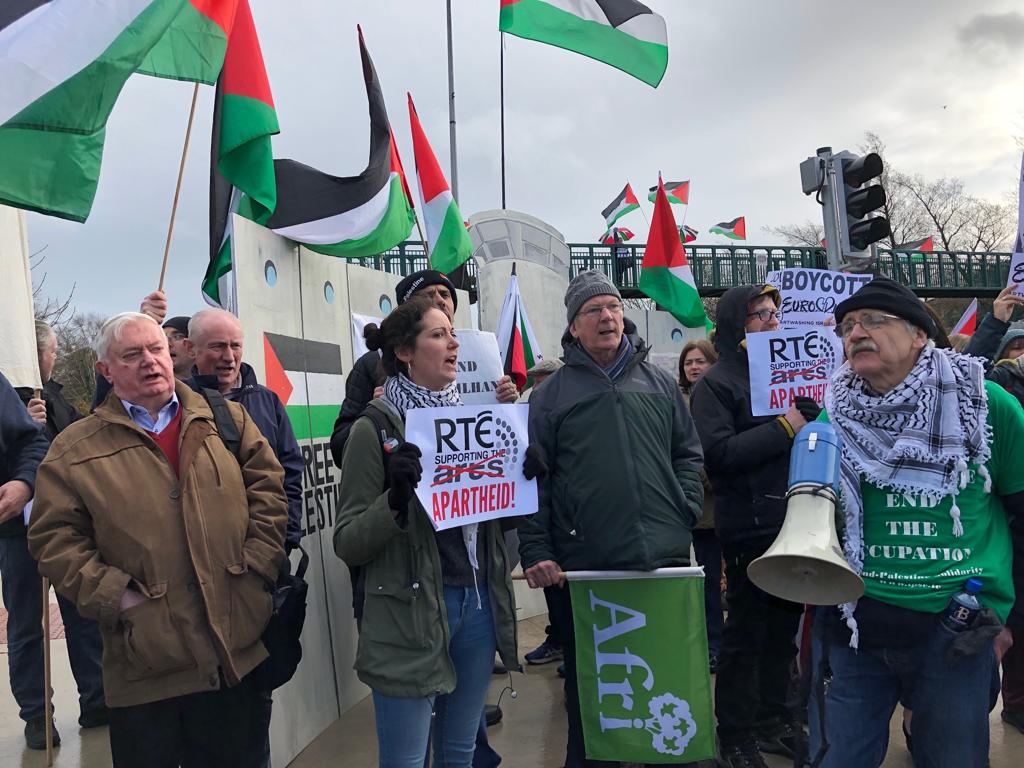 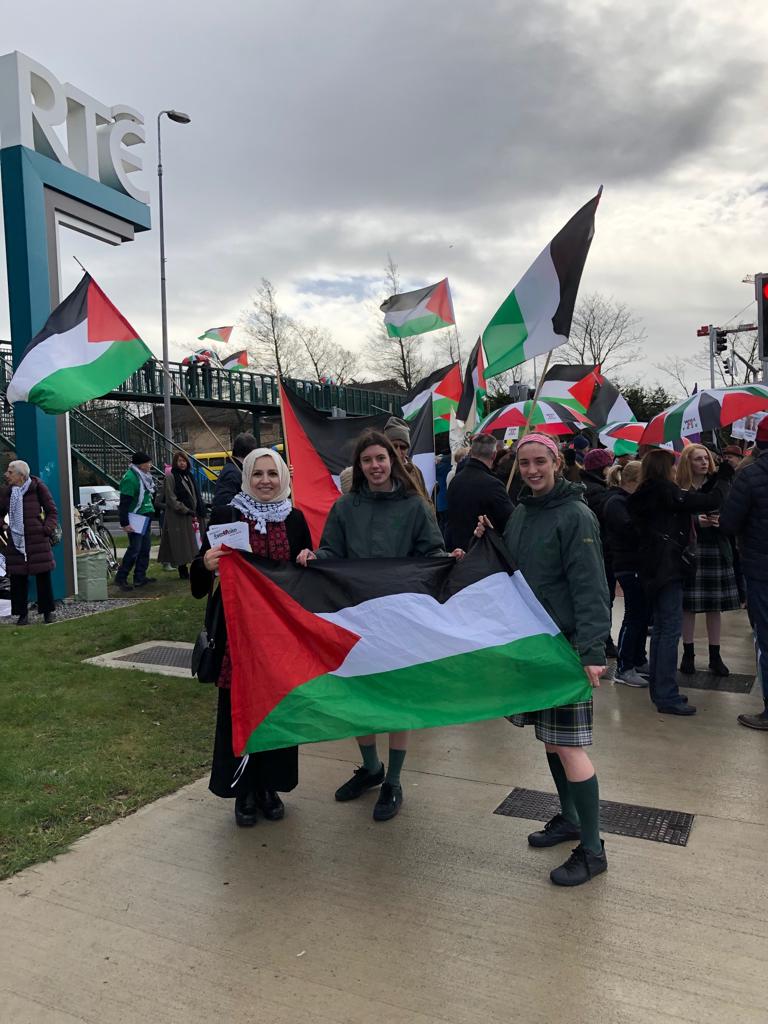 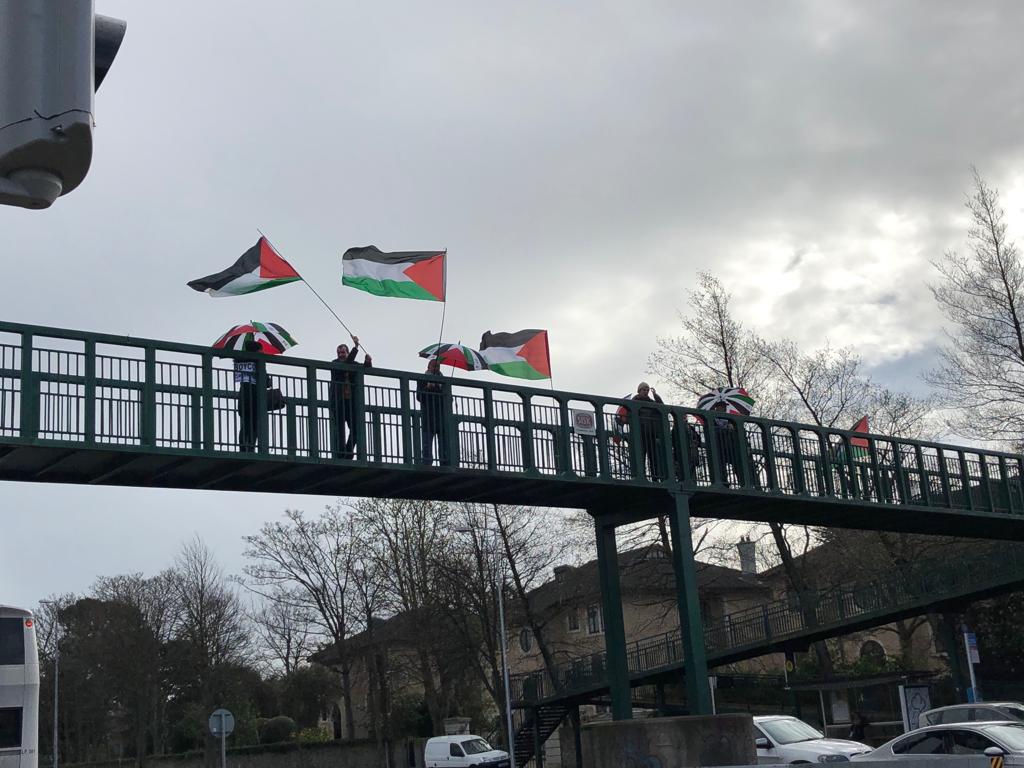