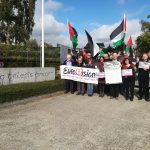 The Irish Campaign to Boycott Eurovision 2019 in Israel has learned the shocking news that the Israeli state broadcaster KAN, which is hosting the Eurovision song contest in May, will reserve 500 rehearsal tickets for Israeli soldiers. This despite the competition being billed by the EBU and RTÉ as “a non-political music event”.

Furthermore, in an example showing just how political and propagandistic Israel’s hosting of Eurovision is, it was revealed that the locations on the “visual postcards” which RTÉ will broadcast between acts will feature the occupied Golan Heights among other places, likely including the Old City in Palestinian East Jerusalem, thus using the event to portray occupied and illegally annexed land as part of the Israeli state.

By participating in this contest RTÉ will be complicit in entertaining an occupying army guilty of decades of war crimes, in the ‘culturewashing’ of these crimes and in the presenting of illegally annexed territories as part of Israel.

Spokesperson for the Irish Campaign to Boycott the Eurovision in Israel, Zoë Lawlor said: “The revelation that all Eurovision performers, including the Irish act, will be forced to perform for members of the Israeli occupation forces, a military that routinely kills Palestinian civilians, including children, should shock anyone who care about human rights. Similarly the fact that RTÉ will be broadcasting Israel state propaganda open laying claim to occupied and illegally annexed territories is astounding. It flies in the face of everything the Irish national broadcaster RTÉ has been claiming about the Eurovision when it says that it is ‘not political’ and ‘a non-political music event’.”

“In addition KAN has increased the ticket prices ensuring that all Eurovision ticket buyers are involuntarily subsidising the cultural privileges of the Israeli military. There is no way that this can be dressed up as non-political. Indeed, it proves what our campaign has been saying all along – the Eurovision in Israel is absolutely political and is being used by the Israeli government as a ‘culturewashing’ opportunity to cover up its crimes against the Palestinian people,” she said.

“It would be morally reprehensible for any act to perform for members of the Israeli military while just down the road Palestinian refugees in Gaza demonstrating for their UN mandated Right of Return to the homes they were ethnically cleansed from in 1948 are being shot down on a weekly basis,” Ms. Lawlor said.

Ms. Lawlor continued, “In 2018 alone a total of 295 Palestinians were killed and over 29,000 were injured by Israeli forces. Indeed last year set a record-high for child fatalities, exceeding the number of Palestinian children killed by Israeli forces in any single year within the past decade outside of large scale military offensives. Thousands of people have also been injured, many of them with life-changing injuries resulting in amputations or other permanent disabilities.”

Ms. Lawlor stated that “it is clear that there is little public appetite for our national broadcaster and artists to lend their names and reputations to Israel’s ‘culturewashing’ exercise in Eurovision 2019. More than 15,000 people in Ireland have signed a petition calling on RTÉ and any potential participants not to go to the Eurovision in apartheid Israel, with thousands more signing similar petitions all over Europe. Artists, human rights activists and public figures including former Eurovision winners, commentators and presenters have joined the call to boycott, as have the Musicians’ Union of Ireland (MUI) and Irish Equity. One hundred LGBTQIA groups have also endorsed the campaign and there will be alternative events hosted all over Europe in solidarity with the Palestinian people.”

Ms Lawlor concluded by affirming the Irish Campaign’s insistence that “there is still time for RTÉ and the Irish performers to pull out of this propaganda fest for apartheid Israel, to be on the right side of history, to respect the Palestinian picket line and to stand with the oppressed and not to perform for the soldiers who oppress them. It’s the only moral option.”

You can contact RTE to complain using one of the options here: https://www.rte.ie/about/en/information-and-feedback/contact-rte/2012/0220/290072-contact-information/