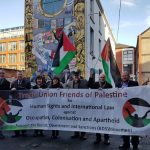 34 European trade union organisations representing millions of workers have written to the European Commission and European governments demanding a ban on trade with illegal Israeli settlements in Palestine.

Welcoming the call, Chairperson of the Ireland-Palestine Solidarity Campaign, Fatin Al Tamimi, said: “We thank all the trade union organisations for this important initiative. It is way beyond time for the EU to act to fulfil its obligations under international law. The EU as a whole and each of its Member States have the mandatory obligation to ban trade with Israel’s illegal colonial settlements, as allowing such entities to trade freely and profit from the occupation violates duties of non-recognition of and non-assistance to serious breaches of international law. The current situation cannot be allowed to continue if the EU is serious about its commitments to human rights and the rule of law.”

Ms Tamimi continued: “Here in Ireland the government has been presented with a unique opportunity get our house in order in this regard. Senator Frances Black’s ‘Occupied Territories Bill’ seeks to ban such trade and bring Ireland into line with its international law obligations Unfortunately, and inexplicably, the government continues to oppose the Bill, placing at odds with all opposition parties and the vast majority of members of both Houses of the Oireachtas. We urge those who care about the rights of the Palestinian people to continue lobbying government politicians to support it.”

The letter is indicative of the growing solidarity with Palestine within the European trade union movement, the letter comes in the wake of the vote earlier this month at the European Federation of Public Services Unions (EPSU) conference in Dublin, where the federation which represents 8 million workers in the EU voted to call “for the suspension of the EU-Israel Association Agreement because of the repeated breach of its human rights provisions.”

Meanwhile, in his legal opinion released last week, advocate general of the European Court of Justice said that European shops ought to label Israeli settler exports so that consumers can boycott them for “ethical” reasons the same way they did South African ones under apartheid.

“This opinion highlights the fact that European governments are falling short on their obligations under international law. In order to be consistent with its own legislation the EU and all European states should go further and end all economic relations with illegal Israeli settlements,” said Koen Vanbrabandt, a chair of European Trade Union Network for Justice in Palestine that initiated the letter.