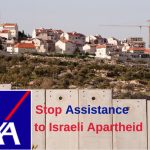 Send a letter to AXA CEOs to demand that it divest from companies profiting from Israeli Apartheid!

Israel can only maintain its regime of occupation and apartheid over the Palestinian people through support from governments and from companies such as AXA.

Now is the time to add your voice to strengthen to the growing global Coalition to Stop AXA Assistance to Israeli apartheid. Even though AXA has taken a first step in the right direction when one of its subsidiaries, AXA IM, divested from Elbit Systems last December, as the SumOfUs report shows, AXA is still complicit in Israeli apartheid.

Send a letter to AXA’s CEOs in France, Germany, Switzerland, the Spanish state and Egypt, to demand that AXA end its investments in companies violating Palestinian rights!