Pledge to Boycott AXA: the insurance company of Israeli apartheid 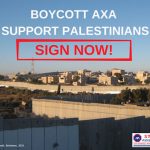 AXA profits from Israel’s oppression of Palestinians. The French insurance company, the second biggest insurance company in the world, is active in 57 countries and has over 108 million clients.

These complicit banks also work as “accompanying partners” by ensuring that the bank provides the construction company with all of the main financial services until the completion of the project. Without these banks many of the illegal Israeli settlement projects would have difficulty being implemented.

The Coalition “Stop AXA Assistance to Israeli Apartheid” campaign calls on individuals, organisations and institutions worldwide to boycott AXA until it ends its complicity with Israeli apartheid and human rights violations.

Until AXA ends its support for Israeli apartheid and human rights violations against Palestinians,

I Pledge to boycott AXA by refusing to buy its insurance products.

I Appeal to other individuals, businesses, sports teams, institutions and trade unions to end all business, sponsorship and insurance contracts with AXA.