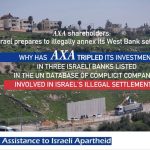 French insurance company AXA will hold its annual shareholders’ meeting on June 30. We need to make sure that divestment from Israeli apartheid is at the top of their agenda. Despite claims of social responsibility, AXA has almost tripled its investment in three Israeli banks that fund Israel’s illegal settlements.

AXA also owns 9.03% of Equitable Holdings, which invests in five complicit Israeli banks and in Israel’s largest private arms company, Elbit Systems, which touts its weapons and surveillance technologies as “field-tested” on Palestinians.

Take three actions to ensure AXA’s shareholders hear why they must divest:

AXA is investing in research to fight COVID-19, but this research doesn’t mitigate the damage from AXA’s investments in Israeli apartheid. Israel continues its brutal repression and theft of Palestinian land despite the pandemic, and it is precisely Israel’s apartheid policies that make Palestinians even more vulnerable to COVID-19.

Our campaigning is having an impact. Since the launch of the campaign, AXA has divested its holdings from Elbit Systems and Bank Hapoalim. AXA has vastly reduced its stake in Equitable Holdings, now an independent company of which AXA owns 9.03%. But AXA’s investments in three Israeli banks have almost tripled! Help us make sure that AXA shareholders hear our message and take action.