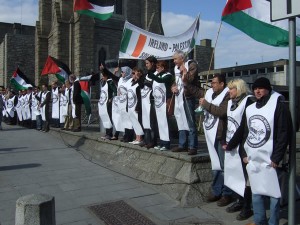 DUN LAOGHAIRE: On the morning of Wednesday 4th May 2011, over 50 human rights activists supporting the Ireland-Palestine Solidarity Campaign formed a ‘human wall’ outside the Annual General Meeting (AGM) of Irish multinational CRH, while concerned shareholders inside asked serious questions about the role of the cement company in the building of Israel’s illegal Separation Wall and illegal settlements in the Occupied Palestinian Territories. CRH has a 25% stake in the Israeli Mashav group, which acts as a holding company for Israel’s sole cement producer, Nesher. Nesher provide up to 90% of all cement sold in Israel, including cement used … Continue reading →

May Day message from the Ireland-Palestine Solidarity Campaign

To all Palestinian worker, farmer and trade union organisations: Image c. IPSC, 2010The Ireland-Palestine Solidarity Campaign sends warm fraternal greetings to our brothers and sisters in the Palestinian labour, farmer and trade union movement on International Workers’ Day. This May Day sees Palestinians in the occupied territories enter the 44th year of Israeli military occupation, and those inside the 1948 territories enter their 63rd year of existence as second class citizens within the Israeli State. The IPSC salutes the Palestinian labouring and farming masses who form the majority of Palestinian society and who have always formed the backbone of the … Continue reading →

Riverdance should not go to Israel: Two Open Letters from the IPSC and set designer Robert Ballagh

See below for two Open Letters concerning Riverdance’s planned tour of Israel in September 2011. The first is from Irish artist Robert Ballagh who was the set designer for Riverdance, and the second is from Raymond Deane, Cultural Boycott Officer of the Ireland Palestine Solidarity Campaign. Please feel free to republish both far and wide. Riverdance in Irsael: Robert Ballagh’s Open Letter 26th April 2011 As the designer of Riverdance I am personally disappointed to learn of the decision to perform the show in Israel at this time. Many years ago I was honoured to meet Nelson Mandela when he … Continue reading →

10th April] Palestine Education is an exciting new development education initiative which aims to provide up to date, relevant and reliable information to those wishing to understand the roots and realities of the Israel-Palestine conflict. The initiative includes a six week course entitled ‘Promises’ which aims to provide an introduction to human rights, media and campaigning. This short interactive course encourages empathy with the victims of human rights violations, and equips them with the knowledge, skills and confidence to become local and global advocates for human rights. In Dublin, the course commences on Tuesday May 10th 2011 from 6.30-8.30pm in … Continue reading → 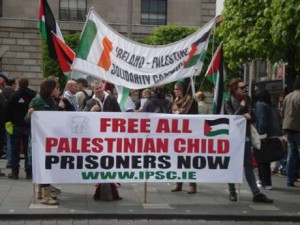 On Sunday April 17th at 2pm the Ireland Palestine Solidarity Campaign (IPSC) marked Palestinian Prisoners Day with a demonstration at the Spire in O’Connell St, Dublin. The demonstration called for the release of all Palestinian political prisoners imprisoned by the Israeli State – those ‘convicted’ in Israeli Military courts and those interned without trial under the ‘Administrative Detention’ regime. This year there was a special focus on the issue of child prisoners – of which there are currently 216 (45 under the age of 16) being held in Israeli jails.[1] The IPSC called this demonstration – as part of the … Continue reading →

[14th April] UPDATE: The three other members of the UN Factfinding Mission – Hina Jilani, Christine Chinkin and Desmond Travers – have released their own statement standing by the report. Read it here. [6th April] Israeli diplomats and pro-Israel lobbyists in the West have seized eagerly upon an article published in the Washington Post on April 1st by Richard Goldstone, the South African judge who chaired the UN Fact-Finding Mission that investigated the Israeli military offensive in Gaza two years ago, codenamed ‘Operation Cast Lead’. Israeli prime minister Benyamin Netanyahu has claimed that “everything we said has been proven true, … Continue reading → 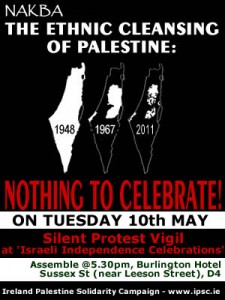 On Tuesday 10th May join the Ireland Palestine Solidarity Campaign in a silent protest vigil at the ‘Israeli Independence Celebrations’, sponsored by the Israeli Embassy. ‘ Assemble 5.30pm @ the Burlington Hotel, Sussex St (near Upper Leeson Street), Dublin 4. Map here: http://tinyurl.com/6y58bl6 Attending the celebrations on the anniversary of the founding of the State of Israel is to celebrate a process of brutal ethnic cleansing and colonisation. On Tuesday 10th May the Israeli Embassy in Ireland is hosting an event at the Burlington Hotel in Sussex St (near Upper Leeson Street), Dublin 4, celebrating the founding of the State … Continue reading →

Shoppers across Ireland are getting the chance to sign a petition demanding that branches of Dunnes Stores take Israeli products off their shelves. The two-week petition drive, launched last weekend by the Ireland Palestine Solidarity Campaign (IPSC), will seek to enlist Dunnes customers in Dublin, Cork, Belfast, Limerick, Galway, Newry, Wexford, Waterford, Bantry, Enniscorthy, and Sligo — just for a start, as the IPSC hopes to spread the campaign to other locations. It comes a quarter-century after Dunnes was at the centre of a bitter two-year campaign of boycott and pickets, when it sacked a group of workers who refused … Continue reading →

[25th March] The revelation by the BBC that the Northern Ireland Assembly’s Culture Minister, Nelson McCausland, has demanded that the Belfast Festival at Queen’s ensure “a view sympathetic to Israel in any relevant talk or debate” is disappointing. The respected Queen’s festival should not be subject to political pressure, especially that which would have it provide a platform for a state with abject disregard for International Law and International Humanitarian Law. Commenting on the revelations, National Chairperson of the Ireland Palestine Solidarity Campaign, Freda Hughes, said: “In effect what the Minister is asking for is that the festival be forced … Continue reading →

IPSC Open Letter Bob Geldof: Do not choose the side of the Israeli oppressor

[23rd March] Below is an open letter to Bob Geldof regarding the offer he has received of an honorary doctorate from Ben Gurion University in Israel. The IPSC urges Mr. Geldof not to accept this dubious doctorate, for to do so would be aiding in the whitewash of Israeli crimes against the Palestinian people. We would also ask you to send emails to Bob Geldof asking him not to accept this doctorate, at the following mails: info@krugercowne.com, tina@bobgeldof.com, enquiries@bobgeldof.com   IPSC Open Letter to Bob Geldof: Do not choose the side of the Israeli oppressor Issued: Wednesday 23rd March 2011 … Continue reading →