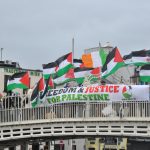 To commemorate the ninth anniversary of the Israeli ‘Operation Cast Lead’ attack on Gaza, and to highlight Israeli’s ongoing brutality coupled with the cruel and illegal siege of Gaza, the Ireland-Palestine Solidarity Campaign (IPSC) staged a series of solidarity vigils around Ireland on New Years’ Eve.

Protesters gathered on the Dublin’s Ha’penny Bridge, Sligo’s Hyde Bridge, Derry’s Peace Bridge, Thomas Street in Limerick, in Galway’s Eyre Square, and even on the Cliffs of Moher to remember the victims of the attacks on Gaza in 2008/9, 2012, 2014 and all the killings that have taken place over the past three years, and the ongoing illegal Israeli siege of Gaza which has resulted in a man-made crisis in Gaza.

Thanks to all our supporters who turned out to let the people of Palestinian know that they are not alone in their struggle for freedom, justice and equality.