In Pictures: Hands Off Jerusalem protest at US Embassy in Dublin 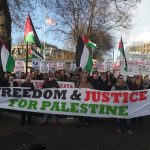 In protest at the Trump Administration’s decision to recognise Israeli-occupied Jerusalem as the capital of apartheid Israel and move the US Embassy there, the Ireland-Palestine Solidarity Campaign (IPSC) held an emergency lunchtime demonstration outside the US Embassy in Dublin on a bitterly cold Friday, 8th December.

A large number of people gathered to denounce the move, and there were speeches from the Lord Mayor Of Dublin Micheál Mac Donncha, Dublin City Councillor John Lyons, and Martin O’Quigley from the IPSC.

A letter of protest was handed in to the Embassy, reading:

We are writing on behalf of the Ireland-Palestine Solidarity Campaign to express the dismay felt by the people of Ireland who support justice for Palestinians over the decision by US President Trump to recognise Israeli-occupied Jerusalem as the capital of apartheid Israel, and to move the US Embassy.

We view this as a totally illegitimate and utterly anti-Palestinian move; it is unilateral and illegal move that will only further embolden the apartheid regime in Israel. We believe such attempts at normalising the occupation and oppression of Palestinians by Apartheid Israel should be opposed by all people who claim to support freedom, justice, equality and peace in the region.

“The decision flies blatantly in the face of international law, the international consensus, and all UN Security Council Resolutions on the subject, including Res. 242, Res. 252, Res. 298, Res. 465, Res. 478 (which declared Israel’s attempt at formal annexation “a violation of international law” which is “null and void and must be rescinded”), and most recently Res. 2334. Res. 2334 reaffirms that the UN:/p>

“[Condemns] all measures aimed at altering the demographic com position, character and status of the Palestinian Territory occupied since 1967, including East Jerusalem, including, inter alia, the construction and expansion of settlements, transfer of Israeli settlers, confiscation of land, demolition of homes and displacement of Palestinian civilians, in violation of international humanitarian law and relevant resolutions.”

“Unfortunately, in undertaking this decision, the US has proven it is not an honest broker in the region, but a partisan advocate for apartheid.

“We call on the United States of America to reverse this decision forthwith, to move to a position that instead of being at odds with international law, instead supports it and works towards ensuring that Palestinian rights are fully respected so that this oppressed people can enjoy living in freedom, justice and equality under a genuine peace in the Palestine-Israel region.

“Furthermore, we salute the brave people in the US who stand up for Palestinian rights, and call on all people of conscience to join the global Boycott, Divestment and Sanctions (BDS) campaign that aims to compel Israel to respect Palestinian rights and international law.

We respectfully ask you, as US Ambassador to Ireland, to make the concerns and views of the Irish people who stand in solidarity with the Palestinian people’s struggle for freedom known to your superiors.