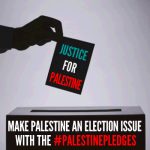 The Ireland-Palestine Solidarity Campaign (IPSC) has welcomed the support from over 140 general election candidates for a series of election pledges supporting justice for the Palestinian people.

At least 147 candidates, from most parties and many independents, have signed the three pledges, which were also endorsed collectively by Sinn Féin, The Green Party, Solidarity, People Before Profit, Rise, and The Workers’ Party. At least one candidate in every constituency endorsed the pledges, while in some constituencies some half to three quarters of candidates declared their support.

The pledges call on candidates to

IPSC Chairperson Fatin Al Tamimi said: “We thank all those candidates who have pledged their support for our Palestine Pledges. This solidarity is required now more than ever as we see the racist Trump-Nethanyahu deal that seeks to tear up international law, disregard fundamental rights, and attempt to re-partition Palestine in a truly disturbing echo of the darkest days of colonial land and resource theft.

“By endorsing these pledges, these candidates have made a strong statement of solidarity with the Palestinian plight – an issue that is of great concern to many voters in Ireland. As former Fianna Fail spokesperson on foreign affairs Niall Collins noted, Palestine ‘is coming up on the doorsteps’ – and we in the IPSC want to thank everyone who has raised the issue during this election, such support is heartening and inspiring” she continued.

Ms. Tamimi concluded: “At the end of the day, whoever forms the new government will come under serious pressure from the US and EU to squash the Occupied Territories Bill and to fall in line with the global attempts to silence and suppress criticism of the Apartheid State of Israel. But this new government will also come under huge pressure from the people power of the Irish public to take an even stronger stance in support of the heroic Palestinian fight for their liberty – and as always the Ireland-Palestine Solidarity Campaign will continue to be at the forefront of building both grassroots and political solidarity with Palestine’s anti-apartheid struggle. Ireland may be a small nation, but we can make an important stand for Freedom, Justice and Equality for the Palestinian people, one that resonates across the world!”

• A full list of candidates who have endorsed the pledges so far can be found in the table below. At present the number of endorsers stands at 146. No Fine Gael candidates have yet signed. This list will still be updated until polling day on our website.

• Every effort has been made to ensure this list is accurate and up to date. All candidates for whom contact details were obtainable were contacted at least three times via email.

• In line with our anti-racist and anti-discriminatory principles, the IPSC only contacted parties that have endorsed the Irish Network Against Racism’s ‘Anti-Racism Election Protocols‘.