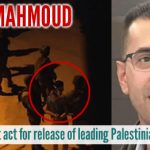 According to reports from Palestine, at around 3.30am last night, dozens of Israeli occupation soldiers stormed the village of Abu Qash near Ramallah, kicked in the door of Mr. Nawajaa’s house, handcuffed and blindfolded him in front of his family, and then hauled him off to Jalameh prison inside the state of Israel.

The IPSC condemns the arrest of Mahmoud Nawajaa, which we view as yet another attack by the Apartheid state of Israel on those who speak out and organise against its crimes against the Palestinian people. That a human rights defender and community leader can be arrested in the dead of night, in front of his wife and terrified small children by dozens of armed soldiers speaks volumes about Israel’s system of oppression.

Despite our differences on tactics and strategy, we have always welcomed the Irish government’s recognition of the legitimacy of the BDS Movement and the government’s outspoken opposition to efforts to attack or criminalise the movement, something the Israeli state spends lots of money engaging in. We have asked the Irish government to condemn this arrest and to protest forcefully to the Israeli authorities to secure Mahmoud’s immediate release.

However, it is important to note that the UN International Convention on the Suppression and Punishment of the Crime of Apartheid defines the “persecution of organizations and persons, by depriving them of fundamental rights and freedoms, because they oppose apartheid,” as one of the inhuman acts committed to maintain an apartheid system.

Mahmoud was one of 18 Palestinians arrested in a similar manner in the early hours of this morning, something that occurs every single night of the week to adults and children alike. It is clear that this is what we are seeing on a daily basis in Palestine.

Therefore, it is high time for states, including Ireland, to move beyond criticism of Israel’s human rights abuses and international law violations, and – alongside the implementation of the Occupied Territories Bill – to impose lawful, targeted sanctions to end these crimes in order to help Palestinians to achieve our freedom, justice and equality. Such sanctions would include a bi-lateral arms embargo on Israel, the suspension of Israel from the EU-Israel Association (Euromed) Agreement and the Horizon EU Framework funding programs – and for Ireland to push for same in the international arena.

We have asked the Irish government to view this arrest with the seriousness it deserves and to act accordingly. If you are tweeting or posting on social media about this, we ask you to use the hashtag #FreeMahmoud

Notes:
[1] The Palestinian BDS National Committee (BNC) was formed in 2005 to call for and lead the non-violent campaign of Boycott, Divestment and Sanctions against the Apartheid State of Israel until it ends the occupation, grants full rights to Palestinian citizens of Israel, and allows Palestinian refugees their UN-mandated Right of Return. So successful has the movement been that Israel considers it an “existential threat” to its regime of occupation, colonialism and apartheid. Israel is spending millions of dollars every year in attempts to attack and criminalise the movement globally

Quotes from Family and colleagues:

Ruba Alayan, wife of Mr. Nawajaa: “Around 50 soldiers were there. They broke the doors and the locks, and they covered Mahmoud’s eyes, handcuffed him, and also took his computer and some personal effects.”Alayan added that the couple’s three young children witnessed the arrest. “They woke up and they were terrified. We were all surprised by what happened, there was no reason for it and none of us expected it.” [source: Middle East Eye]

Jamal Juma’, BNC member: “Until now we have no idea where Mahmoud was taken.” Jumaa said his colleague’s arrest was part of a broader Israeli crackdown on the Palestinian struggle against the occupation. “They are attacking any form of resistance movement in Palestine, including the BDS movement.” [source: Middle East Eye]

Israel’s regime of military occupation, settler-colonialism and apartheid is desperately trying to terrorize Palestinian BDS activists and their families, after having failed to slow down the growth of the movement. We call on all BDS activists everywhere to further strengthen BDS campaigning to hold Israel accountable.” [source: BDS Movement]