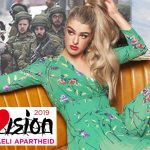 A petition signed by over 7,000 people which asks Ireland’s Eurovision entrant Sarah McTernan to pull out of the song contest in Apartheid Israel this week has been delivered to the singer ahead of her scheduled appearance in this Thursday’s semi-final.

The signatures were collected online and on the streets over the past two months.

The delivery comes a day after Galway City Council passed a motion supporting calls for a boycott of the controversial contest, noting that “it will be openly used for political and militaristic propaganda purposes”. Galway is the third local council to make such a call, following Derry & Strabane, and Sligo last month. Queen ‘s University Belfast Student Union, which has supported the BDS Movement since 2017, also this week cancelled a planned Eurovision screening party.

The petition states that “while Israel – a state which has repeatedly been accused of war crimes by the United Nations and human rights organisations, and openly boasts of how it uses art and culture to whitewash its crimes – continues its oppression of the Palestinian people, no artist of conscience should participate in this ‘culturewashing’ event … Ireland has a proud tradition of standing with the oppressed and against injustice and we sincerely hope you will take this opportunity to stand on the right side of history by refraining from crossing the Palestinian picket line.”

Fatin Al Tamimi, chairperson of the Ireland-Palestine Solidarity Campaign and a member of the Irish Campaign to Boycott Eurovision 2019 in Apartheid Israel , said that the “campaign is disappointed that despite repeated attempts to reach out to her, including letters from Palestinian artists, Irish artists, Israeli activists and artists, LGBTQ+ activists, and Irish anti-apartheid veterans, Sarah McTernan has chosen to go ahead with her participation in the Apartheid Eurovision.”

Ms. Tamimi made a final appeal to Sarah McTernan to cancel her appearance:  “Sadly, by performing in Apartheid Israel, Sarah McTernan will have chosen the side of the oppressor, the side of injustice, the side of the side of brutal apartheid regime that refuses to let my people enjoy our freedom. However, it is not too late for her to change her mind, to choose the side of freedom, justice and equality over oppression, apartheid and racism. To quote the letter from over 30 Irish anti-Apartheid movement veterans sent to her last week, ‘there is still time to make the moral choice and to stand on the right side of history’. Please listen to the thousands of petition signatories. Please listen to your Palestinian sisters and brothers – Palestinians like me. Please cancel your performance at the Apartheid Eurovision.”

The full text of the Galway City Council Motion adopted on Monday 13th May 2019 is as follows:

“Recognising Israel’s ongoing occupation of Palestinian lands, its continued building of illegal colonial settlements in violation of international law and its human rights abuses and war crimes as highlighted by the recent U.N. Commission of Inquiry into killings in Gaza;

Recognising that Israel’s hosting of the Eurovision will be openly used for political and militaristic propaganda purposes, including: the provision of free tickets to the Israeli military and serving soldiers; the intention to broadcast features that will attempt to normalise the illegal Israeli settlements; the building of the ‘Eurovision Village’ on a forcibly depopulated Palestinian area of Jaffa; and plans by the Israeli authorities in illegal settlements to provide free accommodation to Eurovision fans as a means of promoting tourism in these illegal zones.

Noting the call from Palestinian artists, broadcasters, journalists and civil society groups for an international boycott of the Eurovision 2019 in Israel as a means of indicating solidarity with the Palestinian struggle for freedom.  justice and equality;

Noting the widespread Irish public support for a boycott;

This Council calls on RTÉ to boycott Eurovision 2019 as long as it is due to take place in Israel.”