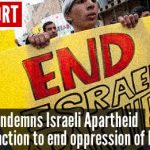 The Ireland-Palestine Solidarity Campaign has praised today’s publication of a detailed new report by Amnesty International showing that Israel is committing the crime against humanity of Apartheid against the Palestinian people.

The 211 page report, entitled ‘Israel’s Apartheid Against Palestinians: Cruel System of Domination and Crime Against Humanity’, is the latest in a long line of human rights organisations levelling similar charges against Israel. It calls for international sanctions, including an arms embargo, against the Israeli state and individuals implicated in these crimes, for the International Criminal Court to investigate Israeli Apartheid, and for the United Nations to re-establish the Special Committee against Apartheid.

According to the devastating report, Amnesty has “has concluded that Israel has perpetrated the international wrong of apartheid” and notes that “almost all of Israel’s civilian administration and military authorities, as well as governmental and quasi-governmental institutions, are involved in the enforcement of the system of apartheid against Palestinians across Israel and the OPT and against Palestinian refugees and their descendants outside the territory.”

IPSC Chairperson Fatin Al Tamimi welcomed the report, stating: “Amnesty International is to be commended for publishing this powerful report, which echoes the points we Palestinians have been making for decades. With crystal clarity, the report shows that oppressive regime Israel imposes upon the Palestinian people is neither accidental nor temporary, but rather it is calculated, systematic and permanent. It is Apartheid, designed to ensure Palestinians remain in a position of perpetual subjugation – and in the case of Palestinian refugees, in a state of eternal enforced exile.”

Ms Tamimi continued: “In particular we welcome the report’s recommendations for action, aimed at national, international and supranational governments and institutions. In the IPSC we have long argued that there must be a political and economic price attached to Israel’s systematic oppression of Palestinians and denial of their rights, so to see such clear calls for concrete international actions and sanctions is refreshing.”

Ms. Tamimi concluded: “From Al Haq to B’Tselem to Human Rights Watch and now Amnesty, all serious human rights organisations – whether Palestinian, Israeli or international – are clear that Israel is committing the Crime of Apartheid. The question is when will international governments recognise this reality and act to end Israeli apartheid? When will Palestinians have our South Africa moment? When will we be free?”

Calling on Israel to:

Calling on the International Criminal Court to:

Calling on the UN General Assembly to:

Calling on the European Union collectively, individual states unilaterally to:

Calling on private entities to:

The full report can be read here.