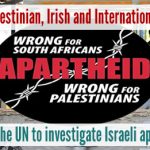 In a statement issued yesterday, more than 450 Palestinian and international organisations have called on the United Nations General Assembly to investigate Israel for committing the Crime of Apartheid. Some 50 Irish organisations are signatories to the call, which originated with Palestinian civil society.

Noting that “Apartheid is a crime against humanity, giving rise to individual criminal responsibility and State responsibility to bring the illegal situation to an end,” the letter calls on all the UN General Assembly, which begans its 75th session yesterday, to:

More than 50 Irish civil society organisations, trade unions, political parties, and anti-racist and community groups north and south co-signed the statement including Trócaire, the Irish Congress of Trade Unions (ICTU), the Irish Nurses and Midwives Organisation (INMO), Mandate, Unison NI, the USI and the NUS-USI. Also signing were political organisations including Sinn Féin, People Before Profit and RISE, anti-racist groups like MASI, Solidarity Against Racism and Fascism and United Against Racism, and Palestine solidarity groups such as the Comhlámh Justice for Palestine group, Sadaka, Trade Union Friends of Palestine, Jewish Voice for a Just Peace and the Ireland-Palestine Solidarity Campaign. The full list of Irish signatories is below.

Welcoming the statement, Ireland-Palestine Solidarity Campaign chairperson Fatin Al Tamimi said: “It is time for the United Nations to sit up, listen and take effective action. We Palestinians have been subjected to decades of human rights abuses and international law violations, including being victims of the Crime of Apartheid, perpetrated by the Israeli state. All we ask is for our freedom, justice and equality – instead what we get is silence and inaction in the face of oppression, war crimes and racism. In the past, the international community came together to reject and help bring the apartheid regime in South Africa to an end, through effective accountability measures. An equally urgent situation today calls us to once again help end decades of Israeli oppression of the Palestinian people. The UN can no longer stay silent – it must act.”

You can read the full statement and see the full list of international signatories here.