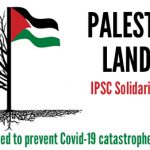 Dear members and supporters of the Ireland-Palestine Solidarity Campaign (IPSC), we hope that you and your loved ones are doing as well as you can be in these very difficult and uncertain times, we are thinking of you and send our best wishes to you all.

Today we commemorate Palestinian Land Day, which marks the date in 1976 when Palestinian citizens of Israel were gunned down, six of them murdered, while protesting for their rights – and also marks the second anniversary of the Great March of Return in Gaza. Sadly, four decades later those rights are still to be realised.

What Covid-19 means for the IPSC’s solidarity campaigning

This year, neither Palestinians nor we in Ireland, can mark it as we would like, due to the measures taken to prevent the rapid spread of Covid-19. However, we will be marking it in others ways, including with a series of important online campaign actions in which your participation will be vital.

More generally, while we will not be able to physically host our planned events, street actions and information stalls for the foreseeable future, we remain committed to continuing our campaigning work for Palestinian freedom, and we know you will continue to support our work. Aside from online campaigning, we are working to transfer some of the public events we had already planned to an online medium and will keep you updated so you can join us to hear from our always informative and inspiring range of speakers.

• Write to/Tweet at the Minister for Foreign Affairs demanding urgent action as Gaza faces into a Covid-19 catastrophe.

• Write to Fianna Fail and Fine Gael to demand that the Occupied Territories Bill to ban trade with illegal settlements in Palestine forms part of the Program for Government.

• Sign and share the Free Palestinian Child Prisoners petition calling for the immediate release of children from Apartheid Israel’s prisons due to the Covid19 threat in these spaces.

• Sign and share Stop Israeli Killer Drones petition calling for an end to EU use of Israeli drones tested on Palestinians.

• Sign and share the ICC petition calling on the International Criminal Court to rule that it has jurisdiction to adjudicate on Israeli war crimes against the Palestinians.

• Donate to urgent Palestinian medical appeals, if you are in a position to do so.

Gaza: On the brink of unimaginable tragedy

Today, Land Day 2020, we send a strong message of solidarity to the Palestinian people who are enduring the global health crisis wrought by Covid-19 on top of Israeli-imposed apartheid, military occupation, land theft, colonisation, mass incarceration, home demolitions and the cruel and illegal siege of Gaza. We are still with you, now more than ever we stand in solidarity with you and support your heroic and historic struggle for freedom, justice and equality.

What should be of immediate concern to the international community is the protection of the Palestinian population in Gaza. To date there are 9 confirmed cases of Covid-19 in the besieged territory. The health system in Gaza is already in a catastrophic state due to Israel’s illegal siege – the United Nations declared that Gaza would be unliveable by 2020 – and the WHO has stated that Gaza simply does not have the capacity to cope with this health crisis.

In the West we talk of ‘social distancing’, ‘self-isolation’, ‘hand washing’, ‘immuno-boosting’, and ‘building ICU capacities’ as means to slow the spread and flatten the Covid-19 curve in order to save as many people as possible – for the people of Gaza, living in one of the most densely populated areas on the planet, these are all luxuries beyond the reach of most.

Over a decade of illegal siege and frequent brutal military assaults have resulted in 2 million people existing in a situation of desperate overcrowding in cramped environments and dire living conditions, including severely limited electricity supply and only one in 10 households has direct access to safe water, and mass malnutrition. Gaza’s health service is already in crisis with only 40 ICU beds for the entire population.

All of this has dramatically increased the people of Gaza’s vulnerability at the best of times – and this is the worst of times. It is not unreasonable to say that Gaza stands on the brink of an unimaginable tragedy. This crisis holds the very real threat of decimating Gaza’s population, especially its elders, many of whom are refugee-survivors of the Nakba: the ethnic cleansing of Palestine between 1947 and 1949 that saw the expulsion of two thirds of the indigenous people in order to create the Apartheid State of Israel.

We are calling on Minister for Foreign Affairs and Trade, Simon Coveney, to demand the lifting of the Israel’s illegal blockade, and the immediate provision of all necessary medical supplies to the people of Palestine and that he push fellow EU foreign ministers to do the same. While it is important to remember that as the occupying power, it is Israel’s legal duty under international law to provide for the well-being of the Palestinian people, we cannot rely on the state to do so, and so we call for emergency international medical aid to help Palestinians to stave off this crisis. We are asking for your support in our campaign calling for this.

Furthermore, we are extremely concerned about the roughly 5,000 Palestinian political prisoners in Apartheid Israel’s jails.

Of these, around 180 are children who languish in cramped and unsanitary conditions with no access to proper, and now potentially life-saving, hygiene practises. These children should not be imprisoned in the first place and keeping them in detention in the face of this global health crisis is absolutely contrary to the UN Convention on the Rights of the Child (CRC), to which Israel is a signatory. These children must be released immediately as a matter of extreme urgency.

Conditions for adult prisoners are no less dangerous, indeed there is routine medical negligence, along with overcrowding, unsanitary conditions, and poor nutrition, making the prisons dangerous breeding grounds for Covid-19. Palestinian political prisoners must be released and their health and welfare protected.

The 150,000 Palestinian Bedouin citizens of Israel living in ‘unrecognised villages’ in the Naqab (Negev) are also very vulnerable, deprived of water, proper sewage and infrastructure and living in very overcrowded conditions with no state support.

We are also extremely concerned about Palestinian refugees living in camps in Lebanon, Syria and Jordan. According to the UN Relief and Works Agency (UNRWA) which provides social services to Palestinian refugees, “overcrowded living conditions, physical and mental stress and years of protracted conflict all make the vulnerable population of over 5.6 million Palestine refugees particularly susceptible to the ongoing threats of Covid-19”. Since 2018 UNRWA has had its budget slashed as a result of the US Trump regime pulling all funding in an attempt to punish Palestinian refugees for demanding their Right of Return.

Business as usual for Apartheid Israel

Even in the midst of this global health crisis it is, sadly, business as usual for Apartheid Israel with ongoing night raids, killings, air strikes, home demolitions, harassment of Palestinians and continuous arrests, all actions which also jeopardise public health. Last week Israeli occupation forces demolished a planned community field clinic and emergency housing centre in the Jordan Valley. Thousands of West Bank Palestinian workers in Israel have had to commit to staying for a two month period away from their families and communities, many of them without any accommodation or in inadequate and unsanitary housing conditions; but as they need to feed their families they have little choice. Thousands of other workers have been deported to the West Bank, including at least one Palestinian men who showed Covid-19 symptoms and was literally dumped on the ground by Israeli occupation forces at a checkpoint, as if he were rubbish.

These are just snapshots of the daily human rights abuses perpetrated by Apartheid Israel against the Palestinian people, ongoing, even in the face of this terrifying and tragic pandemic.

The Ireland-Palestine Solidarity Campaign reiterates our unbreakable solidarity with the Palestinian people, our unwavering support for the Palestinian call for Boycott, Divestment and Sanctions (BDS) against Israel and, as just as Palestinians have demonstrated sumud for decades, so we shall remain steadfast in our efforts to advocate for their freedom, justice and equality here in Ireland.

We know that you, our members and supporters, will remain steadfast in your support too, and we will keep you updated on all of our upcoming campaigns and events.

Finally, if you can afford it right now, here are three critical organizations you can support financially: