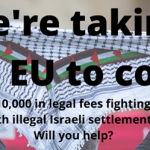 However, the European Commission refused to even register our Initiative! It is clear, the Commission doesn’t want the issue of Israel’s illegal settlements on the agenda and instead wants to keep providing political cover for these war crimes.

Yet we refuse to be silenced. So we are asking you to help us take the Commission to the EU Court of Justice to challenge its complicity with fundamental rights violations.

Unfortunately, however, we need to raise at least €10,000 to pay legal costs (democracy isn’t cheap it seems) and you can help by making a donation to our crowd-funding appeal here. Thank you!

Click here to help our legal fund by making a donation – thank you!