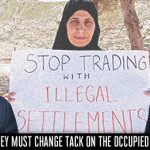 The headline in today’s Irish Independent reads ‘Leaders meet with talks deadlocked over carbon taxes, housing and Israel’. The article goes on to say that a “crunch summit” TODAY “is expected to focus on proposals to ban the importation of Israeli goods produced in occupied Palestinian territories, as this issue has been passed on to the leaders after the negotiators could not reach agreement.”

Your lobbying is working, together we have managed to push the Occupied Territories Bill to forefront of the government formation agenda! We are thrilled to hear that both Fianna Fáil and the Green Party have been pushing for the Occupied Territories Bill to be in the Program for Government. Sadly, however, Fine Gael continue to oppose it, based on unpublished legal advice.

TIME IS OF THE ESSENCE & WE NEED TO ACT TODAY!

So we are asking all those who support Palestinian rights to take a few minutes TODAY to contact Fine Gael leader Taoiseach Leo Varadkar, and Minister for Foreign Affairs and Trade Simon Coveney – and to also CC your local Fine Gael TDs/Senators and urge them to reverse the current FG position.

You can find the contact details for each below – or tag Leo Varadkar and Simon Coveney on Twitter (along with Micheal Martin and Eamon Ryan).

Even if you think Fine Gael will not be moved, there is nothing to lose and everything to be gained – every little bit of political pressure exerted helps to progress attitudes (remember that just over two years ago Fianna Fáil said they couldn’t support the Bill – last year they introduced the legislation into the Dáil). Time is of the essence, tomorrow may be too late!

THIS REALLY IS THE FINAL PUSH FOR THE OCCUPIED TERRITORIES BILL – AND YOUR SUPPORT IS CRUCIAL – WE CAN GET IT OVER THE LINE!

We ask you to please take a few minutes to make this important contact with Leo Varadkar, Simon Coveney and your local Fine Gael TDs and Senators to let them know that even in the midst of global tragedy and uncertainty and fear here at home, you have not forgotten about the people of Palestine – and neither should they!