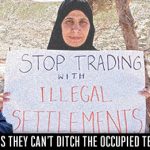 Fianna Fáil, Fine Gael and the Green Party are deep in negotiations to form the next government. They will soon begin discussing matters of foreign affairs – and we need to make sure that Fianna Fáil and the Greens know they can’t just forget about their election commitments that they would support the passage of the Occupied Territories Bill into law.

Indeed, we are very concerned that the Occupied Territories Bill will be discarded by the parties during government negotiations even though it is supported by the overwhelming majority of TDs and Senators.

To ensure that this doesn’t happen it is absolutely vital to that all supporters of Palestinian rights ask Fianna Fáil and the Greens to remember their election commitments to enacting this vital legislation. They should be reminded that now is not the time to forget about the people of Palestine – rather, with Israel’s plan to illegally annex the West Bank moving ahead, such robust legislation is needed now more than ever to defend international law.

THIS REALLY IS THE LAST CHANCE SALOON FOR THE OCCUPIED TERRITORIES BILL – AND YOUR SUPPORT IS CRUCIAL!

We ask you to email or call your local Fianna Fail and Green Party TDs to let them know how important the Occupied Terriroties Bill is to you as voter. The relevant email addresses are:

We ask you to please take a few minutes to make this important contact with your politicians to let them know that even in the midst of global tragedy and uncertainty and fear here at home, you have not forgotten about the people of Palestine – and neither should they!