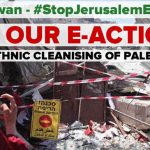 Silwan is an area in Israeli-occupied and illegally annexed East Jerusalem that, like Sheikh Jarrah, is facing ongoing and imminent threats of ethnic cleansing. 1,500 Palestinians are under threat of having their homes demolished as Israel attempts to expel them and replace them with illegal Israeli settlers.

This week the Apartheid State of Israel has begun a series of illegal demolitions in the area.

The Irish government must both speak out and take concrete meaningful action – so we ask you to take one minute to send the below mail to Minister for Foreign Affairs, Simon Coveney.

Words are not enough, join us to demand action from our government!

Email the Department of Foreign Affairs Below!

Want to spread the word? Click here to re-Tweet this e-action!

Want to hit the street? Join our protest on Wed 7 July!

Want to get more informed? Join the webinar on Thur 8 July!