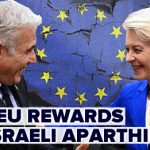 In July, despite Israel’s record of apartheid, human rights abuses and international law violations, the 27 EU Foreign Ministers voted unanimously to reconvene the EU-Israel Association Council for the first time since 2012.

This is an entirely retrograde move that will serve only to embolden Israel in its denial of Palestinian rights and freedoms. The message it sends is clear; Israel can continue to act with impunity, and the EU – including Ireland – will not only ignore its continuous human rights abuses and violations of international law, but reward it with greater access to the EU centres of power.

Indeed, it has already had this effect – since the announcement was made, Israel has launched yet another assault on the people of Gaza, intensified it’s attacks against Palestinian civil society organisations, intends to impose strict new rules on foreigners in the West Bank and plans to forge ahead new illegal settlements, including the E1 Settlement project (which is supposed to be a red-line issue for the EU).

We think this is unacceptable and are asking our supporters to take a minute to send the below email to the Irish government which calls on them to use their veto to oppose the reconstitution of this Council until Israel abides by international law and dismantles its regime of apartheid and persecution.

You can also send a copy of the letter to your local TDs by finding their email addresses on the WhoIsMyTD website.

Note: In the event that this form fails to work, you can also email simon.coveney@oir.ie directly