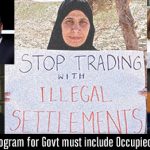 On April 15th Fianna Fail and Fine Gael published a ‘framework document’ for the formation of the next government. Unfortunately this document does not contain any commitment to passing the Occupied Territories Bill that would ban trade with Israel’s illegal settlements in Palestine.

However it is important to note that, as Fianna Gael Chairman Martin Hayden said, “this is not a program for government, but starting point to facilitate negotiations with smaller parties and independents in order to develop a government.” Furthermore, Fianna Fáil TDs have indicated to us that they would like to see the Occupied Territories Bill form part of the Program for Government and will form part of the negotiations.

Therefore, it is really important that supporters of Palestinian rights contact not only Fianna Fáil and Fine Gael, but also the leaders and local TDs from the Green Party, the Social Democrats and Labour, as well as any local Independent TDs you may have. The Greens, SDs and Labour have all in the past voted in favour of the Occupied Territories Bill, and both the Greens and Labour gave specific commitments during the election that they would continue to support it, as did individual members of all the smaller parties including the co-leader of the Social Democrats. Sinn Féin and Solidarity-People Before Profit are also committed to the Bill, but it appears neither will be invited to form the government, so it is important we focus our energies where they are most effective.

THIS IS CRUNCH TIME, and as Fianna Fail leader Micheál Martin said today, “the next two to three weeks will be key in terms of forming a government” – and they will be crucial for the public to lobby TDs to ensure that the commitment to the Occupied Territories Bill by the majority of TDs and parties in the Oireachtas is maintained and the Bill forms part of the Program for Government.

We ask you to email the party leaders, foreign affairs spokespeople, and your local FF/FG/GP/SD/LP/Ind TDs. The relevant email addresses are:

At a time when Palestine, particularly the two million people in the illegally besieged Gaza Strip, stands on the brink of an even worse humanitarian catastrophe, and Israel’s regime of oppression continues to intensify, it’s more important than ever for the Irish government to enact this historic legislation.

We ask you to please take a few minutes to make this important contact with your politicians to let them know that even in the midst of global tragedy and uncertainty and fear here at home, you have not forgotten about the people of Palestine – and neither should they!

Also, our colleagues in the Comhlámh Trade Justice Group have created a petition calling on Fianna Fáil TDs to continue their support for the Occupied Territories Bill. You can sign that by clicking here.