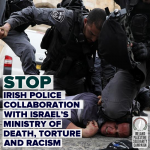 Both An Garda Síochána and the Police Service of Northern Ireland are engaged in an EU research project called ROXANNE, working in collaboration with the notorious Israeli Ministry of Public Security.

This is the Ministry responsible for both the Israel National Police (including the Border Police) and the Israel Prison Service. It oversees routine commission of serious human rights abuses and international law violations against the Palestinian people, and racism and violence directed at minorities within Israel. These well documented violations include brutal killings, the torture and imprisonment of children, medical negligence of political prisoners, home demolitions, persecuting human rights defenders, violent racism, and the entrenchment of Israel’s illegal settlements (the Ministry itself is even located in a settlement).

These abuses and violations committed by the Israel National Police and the Israel Prison Service under the watchful eye of the Ministry are not ‘abnormal’ or cases of ‘bad apples’, but are a vital, calculated, routine, and systemic part of the Israeli state’s wider system of oppression of the Palestinian people.

Any collaboration with this Ministry by police forces in Ireland is unacceptable, regardless of what project is being worked on – and in the past, Portugal’s Ministry of Justice and Belgium’s University of Leuvenboth withdrew from an EU project project due to the presence of this Ministry.

However, that the ROXANNE (Real time network, text, and speaker analytics for combating organized crime) project purports to research how advancements in technology “can help track and uncover criminals and terrorists” is deeply worrying on its own terms; Israel already considers all indigenous Palestinian resistance to its occupation and illegal colonisation as being ‘terrorism’, and all Palestinians as ‘potential terrorists’. It is obvious  that the Israeli state will use any such technological innovation to help entrench its occupation, illegal annexation and colonisation, in racial profiling and racist policing practices, to assist in the arrest and torture of political prisoners and children, and in killings of anti-occupation activists.

We ask supporters of Palestinian rights to take just a few minutes to send the two quick emails below – north and south – demanding the end of our police forces’ unacceptable collaboration with this violent, racist and colonial Israeli ministry.

The emails have already been filled out so you just need to enter your name and email address and hit send. But it’s always better to compose your own message if you have time – even just a few lines – as that has more impact than standardised letters. Thank you!

In the south: Stop Gardaí collaboration with Israel’s ministry of death, torture and racism

In the north: Stop PSNI collaboration with Israel’s ministry of death, torture and racism