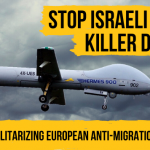 These weeks are difficult times for all of us – and as we all need to protect our health, we also need to ensure that these are times of mutual care and not of complicity and corporate profit. It is now that our capacity to show solidarity is the most important.

In this spirit, our partners in Stop the Wall and the European Coordination of Committees and Associations for Palestine (ECCP) have launched today Monday 30 – Palestinian Land Day and the anniversary of the Gaza initiated Great Return March – a petition to ask the EU #HealthcareNotWarfare: Stop using Israel’s killer drone to militarize your anti-migration policies.

Israel uses the pandemic as a smokescreen to accelerate the de facto annexation in the West Bank and increases repression. COVID19 spreads as well under apartheid and in the besieged Gaza Strip with only 200 testing kits and 40 intensive care beds for 2 million people any effective response is impossible. Meanwhile, the EU further closes down and militarises borders and literally imprisons migrants in crowded camps.

JOIN US – SIGN/SHARE NOW: https://petition.stopthewall.org European agencies @Frontex and @EMSA_LISBON are using Israel’s killer drones developed during the massacres in Gaza for its anti-immigration policy. We can stop it now! #worldwithoutwalls #nodrones #HealthcareNotWarfare