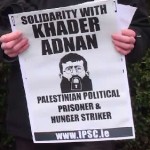 This action took place on the 58th day of his hunger strike against his administrative detention (internment without trial) by, and physical abuse suffered at the hands of, the Israeli state. Khader was detained on 18th December 2012 and put in prison for four months (despite not being charged with anything). He immediately embarked upon a hunger strike in protest at the conditions and treatment faced by both himself and the over 4,440 other Palestinian political prisoners languishing in Israeli prisons. Physicians for Human Rights – Israel were today allowed to examine Khader, and reported that he remains shackled to his bed, his condition, “already at a life-threatening stage, continues to deteriorate” and he is “experiencing extreme pain.” It is clear that without intervention to secure his release, he will die soon.

Also today it was announced that Khader, had the appeal against his Administrative Detention denied on the basis of secret evidence not available to his lawyers. His claims of physical abuse were dismissed out of hand. This is justice, Israeli Apartheid style.

Speaking at the vigil in Dublin today, IPSC Chairperson Martin O’Quigley, said that “of course, this case is not simply about Khader. What he is putting his life on the line for is the rights of all Palestinian political prisoners, who suffer brutal treatment under the Israeli prison regime. There are over 4,400 such prisoners, including more than 130 children, in Israeli jails. Human rights reports regularly cite cases of torture and other forms of maltreatment. According to the ADDAMEER prisoners’ rights group, some 40% of the adult male population in Palestine have been imprisoned at one time or another since 1967. This is the price Palestinians are forced to pay for demanding their human, national and democratic rights”.

“This is just one aspect of Israel’s Apartheid policies against the Palestinian people. As long as Israel is able to act with impunity due to the international community’s failure to take meaningful action, these injustices will continue unabated. The IPSC calls on the Irish government to intervene in this case and ensure that Khader Adnan’s sacrifice is not in vain. Khader, and all other Palestinian political prisoners, be they Administrative Detainees or those convicted in military courts which do not meet international legal standards, must be released. Israel must be forced to cease victimising those who stand against its Apartheid regime”, Mr. O’Quigley concluded.