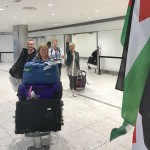 Dear friends, in case you missed this shocking news last week, while en route to occupied Palestine four Irish people were seized by Israeli authorities in Ben Gurion airport and deported. Below is a statement issued by the four deportees which includes a call for you to write to the Minister for Foreign Affairs Simon Coveney (minister@dfa.ie) voicing your concerns about this arbitrary expulsion of human rights activist to stop them from bearing witness to the effects of Israel’s apartheid regime.

Of course, while these deportations pale in comparison to the treatment meted out to Palestinians on a daily basis, they are nevertheless hugely significant. One of those deported, Elaine Daly, has organised almost 20 trips to the West Bank since 2006, ensuring that almost 500 predominantly Irish citizens have seen first hand and up close the devastating effects of the Israeli occupation on the people of Palestine. Trips like these are hugely important in building grassroots solidarity between ordinary people – and these deportations are a direct attack on these networks of solidarity. Furthermore, they fully illustrate the stranglehold that Israel exercises over the lives of Palestinians, dictating who can and cannot enter the occupied territories – even those areas nominally under ‘full’ Palestinian control.

We too urge you to please take the time to write a short message to the Minister voicing your concern.

Statement on the deportation of Elaine Daly, Joan Nolan, Fidelma Bonass and Stephen McCloskey by Israel

On Saturday 9 September 2017 four Irish citizens – Elaine Daly, Fidelma Bonass,  Joan Nolan and Stephen McCloskey were deported from Ben Gurion Airport, Tel Aviv, Israel. They were travelling with a delegation of 31 people (primarily Irish citizens) on an awareness raising visit to the West Bank.  Their itinerary was to include meetings with Israeli and Palestinian human rights organisations and individuals, a visit to a refugee camp, and a tour of settlements together with day trips to some of the main towns in the West Bank.  The aim of the trip was to bear witness to the everyday hardships suffered by Palestinians as a result of the restrictions imposed by the Israeli Separation Barrier, permanent checkpoints and settlements. The other 27 members of the delegation were allowed to continue into Israel/Palestine and they arrived back to Ireland on the 16th September.

The reason given for Elaine, Fidelma, Joan and Stephen being denied entry into Israel was:
* Prevention of illegal immigration considerations (clarification has been sought on this as they were all travelling on valid Irish passports).

Elaine had an additional reason:
* Public security or public safety or public order considerations (Elaine has asked the Israeli Embassy for clarification on this issue as the safety and security of all trip participants is her main priority).

Please raise the issue of these unjust deportations with Simon Coveney, the Irish Minister for Foreign Affairs.  Israel is clearly ramping up pressure on activists and organisations that show solidarity with the Palestinian people.  They are trying to intimidate and silence activists and we can’t allow this to happen.  Please contact Minister Coveney (minister@dfa.ie) and your local TDs to raise your objection to their deportation.