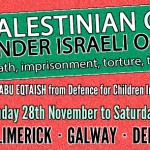 To commemorate the annual International Day of Solidarity With the Palestinian People 2016, the Ireland-Palestine Solidarity Campaign (IPSC) is honoured to host a speaking tour featuring Ayed Abu Eqtaish from Defence For Children International in Palestine between Monday 28th November and Saturday 3rd December.

Mr. Abu Eqtaish will speak in the following locations:

Hosted by the Ireland-Palestine Solidarity Campaign to commemorate the annual International Day of Solidarity With the Palestinian People 2016.